Home Drama Is the forthcoming drama of Sonya Hussain and Zahid Ahmed inspired by... 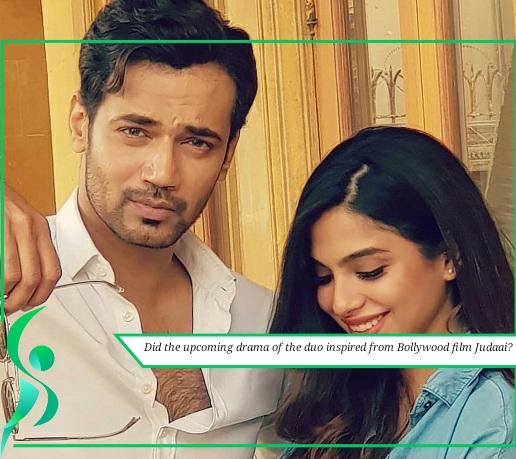 Sonya Hussain and Zahid Ahmed are the much-adored on-screen pair in the industry. The duo was last seen in the serial titled Ishq Zahe Naseeb which was critically appraised on a high scale by the viewers. The on-screen pair is now back after almost 4 months with a new serial named as Mohabbat Tuje Alvida.

The duo has always been praised for their sizzling chemistry and as soon as the teasers of the serial were dropped, fans were overjoyed to see their favorite couple on-screen together again.

Hum TV released three teasers starring the triad Zahid Ahmed, Sonya Hussain, and Mansha Pasha which shows Sonya (Ulfat) and Zahid Ahmed are playing a happily married couple. The male lead (Zahid) is head over heels by his wife which is noticed by his boss too ( Mansha Pasha). The teaser further revealed that Ulfat is lured by wealth and to get rich, she forces her husband to get married to his boss ( Mansha Pasha) for 10 crores PKR.

Fans were quick to notice the major vibe from the teaser with bollywood film Judaai, starring Anil Kapoor, Late Sridevi and Urmila Matondkar.

Comparison with the movie :

The film portrays a love triangle between Kajal (Sridevi) wife of an honest engineer Raj (Anil Kapoor)and Raj’s boss’s niece Jahnvi (Urmila Matondkar). Kajal was lured by wealth (same as Ulfat is shown) and insist on her husband get married to Jahnvi. Slowly and lately she realizes her mistake, seeing her family happy and content with Jahnvi.

The film was also a remake of Telugu film released in the year 1994 which was also a remake of Hollywood film. Undoubtedly the drama shared the similarity with the film but we should wait and watch to see if it get the stereotypical end or not. Although Mohaabat Tujhe Alvida is a refreshing script from the usual storyline and we are looking forward to it.

Directed by Barkat Siddiqui and written by Abdul Khaliq Khan will go on floors from 15 June, 2020 told by Sonya herself,till then we have to wait to watch any similarity with the film Judaai.

What do you think about the teaser? Will Zahid Ahmed be able to make it for Main Na Janoo?