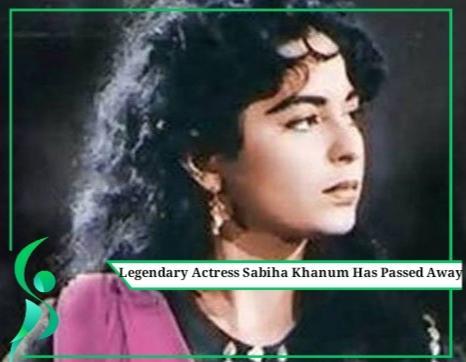 Sabiha Khanum’s granddaughter and model Sehrish Khan confirmed the death of the superstar and said that Sabiha Khanum was suffering from various ailments including blood pressure and diabetes.

She ruled the Pakistani film industry for two decades. The first Pakistani Golden Jubilee film also came to her. She was 85 years old. She was also awarded the Medal of Excellence for Best Actress.

The first superstar of Pakistani film industry, Sabiha Khanum’s real name was Mukhtar Begum. She was born in 1935. Her parents Muhammad Ali Mahiya and Balu Begum worked in the theater.

She started her film career in 1950 with the film ‘Bailey’, in 1954 with the film Anonymous, her fame took four moons, then in 1956 she played the role of Nooran in the film ‘Dula Bhatti’ which won the audience.

Since then, several successful films have made her one of Pakistan’s most successful heroines, including ‘Waada’, ‘Hatim’ and ‘Sheikh Chali’.

Actress Sabiha Khanum has done most of her films with Santosh Kumar and she got married to him. She had been living in the US for a long time where she died on Saturday morning and the golden chapter of Pakistan’s film history came to an end.