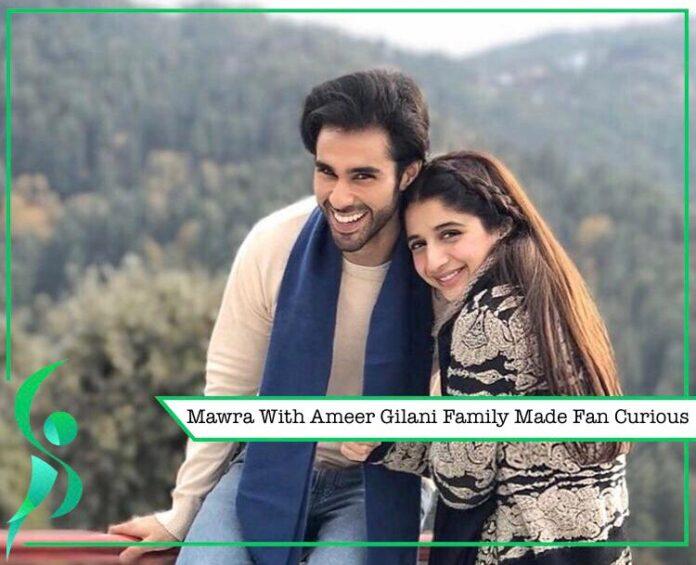 Mawra Hocane and Ameer Gilani are recently done with their first Drama “Sabaat” and fans as usual can’t stop shipping them. Their on-screen chemistry was loved and adored by everyone. But what made some of their shippers happier is their off-screen chemistry. To those who don’t know then, Sabaat was Ameer Gilani’s debut drama and his first one seems to be an all-rounder.

Sabaat was the story of independent girl belonging for mediocre family played by “Mawra” and the boy belonging from high class household played by “Ameer.” This story line might sound typical one but there was a lot more goes on in between the story line. Well, this is just not it they both have been really open about each other on the social media.

Posting each other pictures and commenting on them is like a basic and casual thing for them. But again not for their fans who want to see them together. One more interesting fact about them is they are not just co-stars but have studied in the same university as well. Which means they have been university fellows on and off screens.

Also, Mawra another super hit drama was “Angan” which was extremely loved by everyone. This drama was alongside Sajal and it was loved by everyone so much that she received such fandom from that. Apart from that she and her sister Urwa Hocane are running e-commerce apparel which seems to go quite well in the market. These famous showbiz sisters have quite a big fandom out there.

Talking about Ameer then this boy is on the next level. He just started his studies further in law and that too in Harvard Law School alongside his acting skills. Which is commendable!

But what leaves a spark of curiosity among the fans is the fact that “kheech meri photo” girl was seen snapped with the family of Ameer Gilani. There was a time when we used to see Sajal Aly with Ahad Raza Mir’s family a lot despite them denying them being together. But later they ended up being husband and wife to each other.

Now we think that, is the history repeating again? Well, we won’t make you wait for any more longer. The picture of them is below:

well, this picture left the fans quite suspicious and made them think if they are together or not? Here are some comments from them.

Apart, from hypothetical situations, and are a consideration if we are a little real. Then both of them have just simply denied their togetherness. And said that they both like each other very much and are just friends and nothing more than that.

Well, we can’t tell them if they are in denial phase, acting up, or just being honest. What do you thing? Also, do you like their pair or want to see them together again? Comment down below.