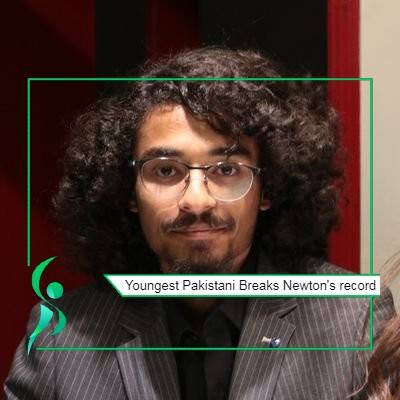 Only 17 years old and he is already a recognised scientist. Muhammad Shaheer Niazi’s research on electric honeycomb was recently published in the Royal Society Open Science journal.

Physicists have known the phenomenon of electric honeycomb for decades. It occurs when a layer of oil is placed in an electric field between a pointy electrode and a flat one – and the instability caused by the build-up of ions applies pressure to the surface of the oil – creating a beautiful pattern that looks like a honeycomb, or a stained glass window.

The high school student from Pakistan’s city of Lahore managed to photograph the movement of ions that forms the honeycomb besides recording the heat found on the surface of the oil. No one has done this before.

Electric honeycomb phenomenon was the problem given to him at the International Young Physicists’ Tournament held in Russia last year. Muhammad Shaheer Niazi, and four other students, made up the first-ever team to represent Pakistan at the tournament. Returning from Russia, Muhammad Shaheer Niazi decided to get his research published.

It took him another year of work to come up with “novel ideas” before his paper was finally accepted for publication. He received the letter of acceptance just days ahead of his 17th birthday last month.

“Your research is like your child, and you feel out of this world when it is accepted for publication,” Muhammad Shaheer Niazi tells the BBC in an interview at his residence in Lahore’s posh Sukh Chayn sector.

With the slim stature of a teenage boy with curly hair and spectacles sitting firmly on his nose, the young scientist cuts a smart figure.

Anticipating the first question, he settles down on a couch next to a desk laden with boxes full of wires, motherboards and incomplete circuits. This is where he conducts his experiments.

How is an electric honeycomb formed? Mr Niazi elaborates: “Electric honeycomb perfectly demonstrates how everything in this universe is seeking equilibrium. Its hexagonal shape is the most stable structure.”

In this case, he says, two electrodes are used; a pointy needle on top of a flat surface with a thin layer of oil on it. High voltage from the needle makes ions bombard the surface of the oil, on their way to meet the ground electrode.

“It is just like lightning striking the surface of earth,” he says. But oil is a non-conductor. The ions start accumulating on the surface of the oil. As the pressure increases, they create a depression and manage to meet the ground electrode.

“The amount of energy that goes in equals the energy that comes out and thus the flow of electricity is efficient. This way equilibrium is restored,” he sums up. Mr Niazi replicated the phenomenon at last year’s tournament.

To prove his findings, he photographed the ion wind demonstrating that the ions were moving. He also recorded the heat produced through their movement, a finding that needs further study.

He says he had been using the shadowgraphy technique just for fun before he decided to use it in his research. “I thought if I see my research from that perspective, I might discover something new. That’s how I managed to photograph the shadow of ion wind and it was added as novelty in my paper.”

Muhammad Shaheer Niazi says that using this technique an oil droplet can be manipulated without touching it. Engineers can use the visualization of this phenomenon to develop technologies that can be used in biomedicine and in printing.

In the country he comes from, not many his age would dare venture into avenues of learning other than conventional schooling. For Muhammad Shaheer Niazi, traditional classroom learning became boring at times. It was then that he turned to other avenues such as books he received from his father and grandfather.

At a very young age he was also introduced to the concept of self-learning. He was only 11 when he first started taking online courses. He has taken 25 courses in different subjects from platforms like Coursera. For toys, he owns a telescope and tools for his scientific experiments.

“When I was a child I used to watch documentaries on science with my grandfather and read books on mathematics and other science subjects,” says Muhammad Shaheer Niazi.

He has an inquisitive nature. His mind is always abuzz with questions and then theories to explain them. Yet, he too seeks equilibrium. Muhammad Shaheer Niazi has a deep interest in music and art. He creates excellent pencil sketches and is a self-taught pianist.

He was not expecting the media attention he is now getting. But he is glad he did something that made his country proud. He hopes to get into a reputable educational institution where he can further his research in physics.

Muhammad Shaheer Niazi aims big – “I would love to win another Nobel Prize for Pakistan” – and he thinks bigger – “Isaac Newton was 17 when his first paper was published; I was 16 when I officially received my acceptance letter.”