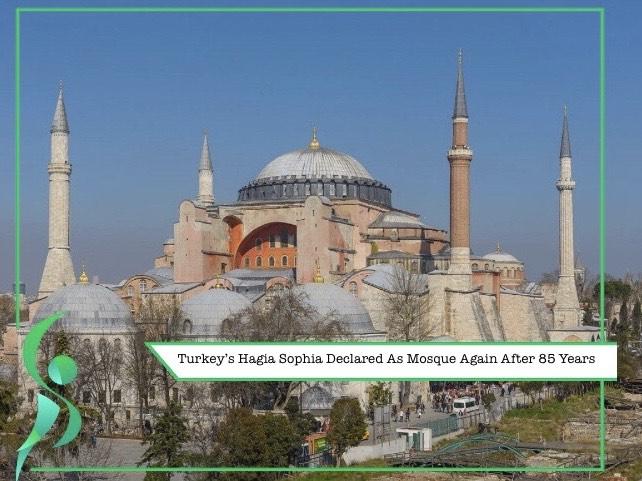 Turkey is the only country in the world which is the part of Asia as well as of Europe. It has a lot of tourists attraction but Turkey’s Hagia Sophia museum and blue mosque are the most adored destinations in Turkey. Well, the recent president of Turkey Tayyip Erdogan is always working to bring religious favor to the country.

As the Prime Minister of Turkey announces to convert the famous Hagia Sophia museum into the mosque but he received a lot of international criticism over this decision but still he chose to ignore it and stick with his decision as the Hagia Sophia Mosque will now use as the representation of the Turkey’s “sovereign rights.”

Earlier in 2018, he consecutively expressed his wish of converting Turkey’s Hagia Sophia museum back into the mosque as he’s very determined to take step towards all the Islamophobia. In 2018 he also recited the verse of Quran in Hagia Sophia.

And now recently the Prime Minister stated in his virtual conference that: “Those who do not take a step against Islamophobia in their own countries, attack Turkey’s will to use its sovereign rights,”

The museum is now formally converted into the mosque on Friday and now all the Muslims are allowed to worship Islam in now again converted into Hagia Sophia Mosque freely. He also added that Muslim prayers would initiate at the UNESCO World Heritage Site on July 24.

This was such a pleasant news to hear and one of the most good news of 2020. Turkey is gorgeous and stunning and now that we Muslims can proudly say that Hagia Sophia is a Mosque is purely a blessing. Turkey is on everyone’s wish list and is a place that everyone wants to explore.

Here’s the video of virtual tour Hagia Sophia Mosque, if you are a huge fan of it like us then watch it and enjoy!