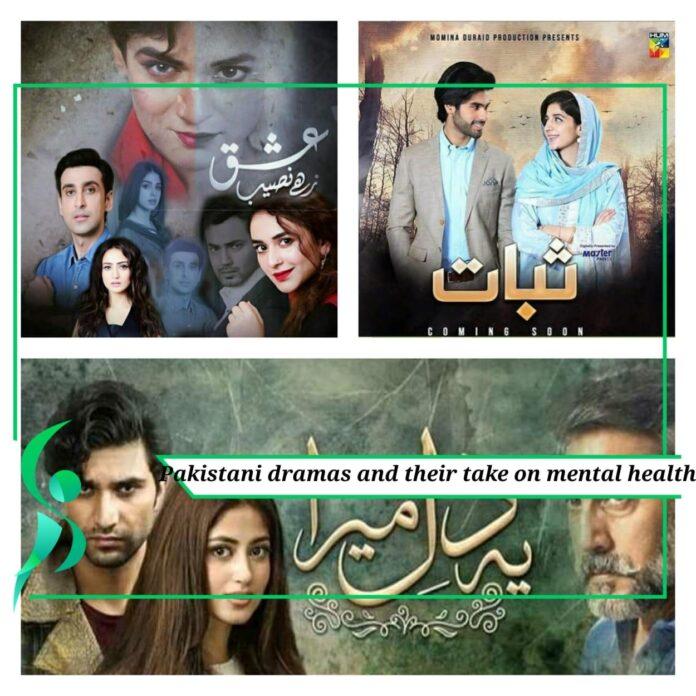 Have a look on Pakistani dramas and their stance on mental health.

In Pakistan film and TV have always played a significant role in addressing taboo topics, one such topic is mental health. In recent times the Pakistani dramas have tried to address it, some managed to do a decent job while others failed to do justice.

Overall the picture of Pakistani dramas is a hit and miss scenario and it seems a lot more work should be done. Let’s look at Pakistani dramas who tried to break a stigma attached to mental health.

The recently concluded drama, starring Ahad Raza Mir and Sajal Aly, reflected the mental health of two characters who are struggling with their traumatizing past. The problematic past continues to haunt them where Anna (Sajal Aly) seeks a therapist in initial episodes.

Aman ( Ahad Raza Mir) suffers from seizures, and it would have done well if the makers pointed out what exactly they are suffering.

The much-acclaimed drama, Ishq Zahe Naseeb addresses the concern of Split Personality Disorder portrayed by Zahid Ahmed.  The actor essayed the role up to perfection but one thing which went wrong was that not all the symptoms are obvious.

The case showed that a man adapting the personality of women was nowhere close to its symptoms. Usually, patients have difficult and enervating symptoms which are difficult to diagnosis by medical officers.

The acclaimed drama of last year was Ranjha Ranjha Kardi and Imran Ashraf essayed the role of a mentally challenged person focusing on multiple aspects of his personality. The character was seeing a doctor which helped him in improving his condition.

The currently aired drama Sabaat addresses the mental health concern of Narcissistic Personality Disorder (NPD). A key character Miraal seems to be a rude and spoiled brat but in reality, she suffers from NPD. She constantly dictates everyone around her and feels superior without knowing their perspective.

The drama will soon introduce a character of a therapist who will come to Miraal’s life.

Shehzad Sheikh and Yumna Zaidi’s current drama see Jenaan Hussain as Mohini whose mental growth has stopped after the age of five. She gets hyper but is very loving at the same time.
The drama also addresses the care and needs of a mentally disabled person.

Pakistani dramas have been a successful medium, bringing the amazing talent of actors, writers, and directors. It is indeed a treat to see visual medium making a positive impact in the lives of people.

Moreover, a drama related to schizophrenia will soon be on air starring Sonya Hussain and Sami Khan in the lead roles which we all are waiting for. We hope to see more Pakistani dramas like this in future making people talk about it in real life.

In a country like Pakistan, one has to find a lot of courage to address it but it looks like our dramas are now ready for it. Kudos! To all the team of these amazing Pakistani dramas who dared to talk about mental health.