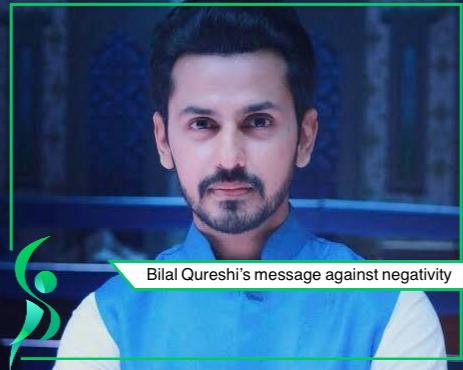 Have u ever faced a situation where people around you spreading hate and negativity in an effort to harm your mental peace and your reputation like what Bilal Qureshi said. No matter how strong you are, it can be damaging and painful. Negativity only spreads hate and attracts negativity like a magnet. We all encounter negativity in our daily life.

Who are negative people and what is negativity ? What is their aim?

People spread negativity and all they do is complain, bitch, moan and spread their anger and hate, people who blame everyone else but them for their failure, their main aim is to devastate the peace of society. Here is what Bilal Qureshi posted about such people:

The best solution to deal such people is to limit your interaction with them,don’t just absorb the comments that you are being bombarded with, especially if they are about you, it’s wise to be quick in your response because being quite can give the impression that you are accepting what’s being said.

Just don’t pretend their comments are true or what they said is true,point out to the person that their constant negativity is not a good thing.

Don’t take the burden of other’s harsh comments upon your life,change the topic when u suspect the conversation taking the turn towards negativity, be a champion of positivity by changing the subject.

There is one harsh truth, there are times, we have to leave such people behind, especially if you have exhausted your best efforts to maintain a positive relation. Don’t let people bad comments put any influence upon your life,detach yourself from their frustrations,be firm,be calm and identify what gives you positive energy.

Dealing with negative people taxes and drains your energy.Therefore,whenever you’re forced to deal with such a folk, take time afterward to recharge your emotional batteries.The best thing to do after dealing with such people is to call or visit a kind, well spirited person who shares your basically positive attitude.

This means that there are really only two other options left. First, you can grit your teeth and accept the negativity and hope that things will improve. The second is to seek the help of a counselor or an arbiter (a common friend), and hope that a “third party” perspective will help the negative person recognize that their negativity isn’t helping anyone.

Be positive in your life,be good to others,this is the perfect motto for living a happy life,add these lines in your life for maintaining the peace of your mental health and the peace of society.

Keep your face towards the sunshine and shadows will fall behind you.