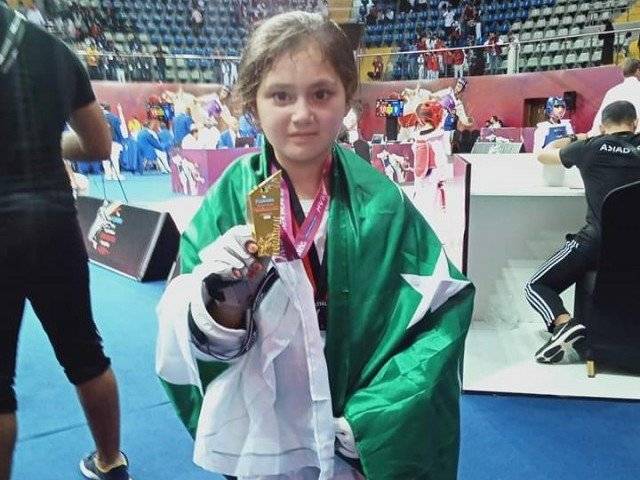 Ayesha Ayaz, one of the Pakistan’s youngest athlete, who has accoladed a gold medal in 34kg category at the Al Fujairah Open International Taekwondo Championship 2020, held in Dubai.

Ayesha is a 9 years old girl, student of IV class from Swat Valley in Pakistan’s Khyber Pakhtunkhwa province, and was introduced to martial arts at the young age of three and achieved the honours of being a five-times district champion, two-times provincial champion and three-times national champion.

According to the reports Ayesha revealed that her next target is to compete in the Olympics. “I am working hard and practising daily under my father’s supervision.”

Ayesha’s father, Ayaz Naik is also a Taekwondo athlete and runs his own academy in Swat.

“She is a great little athlete and I will take every step to support her despite social displeasure,” the proud father told Gulf News. “It is hers and now my dream is to see Ayesha participate in [the] Olympics and raise Pakistan’s flag high at the global event.”

She grew up practising with her brothers Zaryab Khan, 7, and Zeeyab Khan, 5, who are also national champions.