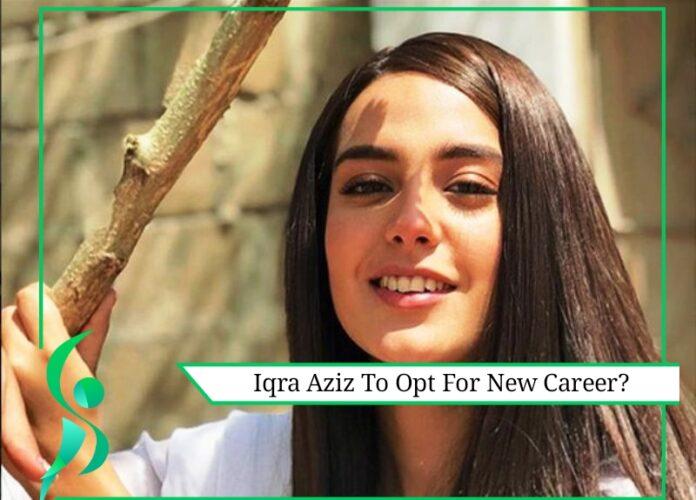 Not good news for you if you are Iqra Aziz fan, as Iqra is believed to be quitting showbiz and opt for a new career in life ahead. What lies ahead is yet to be disclosed, Iqra hinted in a recent Instagram post that she is trying out something new we wonder what it could be? People are speculating that maybe she is trying her luck in scriptwriting or maybe she is signing her new film?

No doubt, Iqra has given some mind-blowing performances to date. We absolutely love the script choices she has made so far. She has played every character with perfection.

Her blockbuster drama Suno Chanda is one of the watched dramas of the Pakistani industry worldwide. People went crazy for the show, and makers even make a sequel of the drama on public demand. Fans loved Iqra and Farhan Saeed chemistry in the serial.

Iqra Aziz is one of the most versatile actresses in the Pakistani industry. Yet again, she stunned everyone by playing Nirma in the serial, a witty, selfish, greedy person who would do anything for money. She played the role opposite her husband, Yasir Hussain.

No matter what role she plays, she leaves the audiences in awe every time she appears on the screen. Her on-air drama these days is KASAK, starring opposite Junaid Khan.

We are eagerly waiting for what she is up to these days, so put up your thinking caps on! What do you think? Share your thoughts in the comment section below?