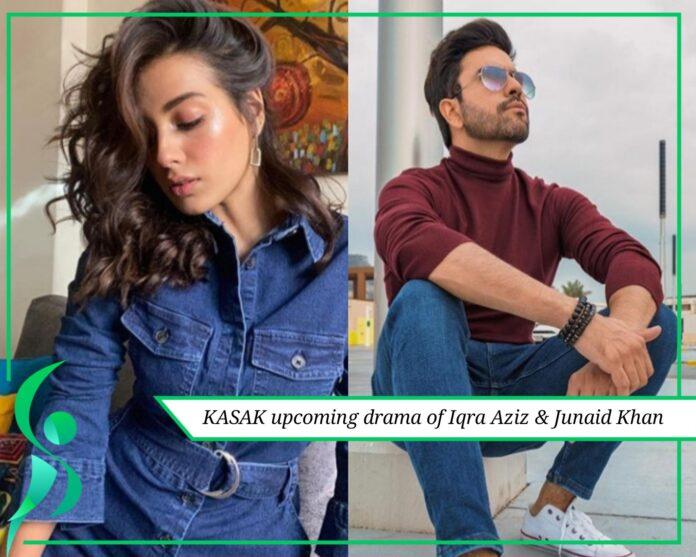 Promo of Drama Serial Kasak has been released on ARY Digital.

Iqra Aziz Hussain is a 22-year-old Pakistani Television Actress. She got a lot of fame after doing the character of Jiya in Suno Chanda which was directed and produced by Momina Duraid on Hum TV. She also got the Best Television actress award for this Drama serial.

Junaid Khan is a 38-year-old Pakistani Television Actor. Hee got a lot of fame after doing the character of Dr. Talal Sikandar in Sun Yara which was directed by Danish Nawaz and Produced by Humayun Saeed on ARY Digital. He also got the Best Television actor award for this Drama serial.

This Drama serial was shooted in Dubai in 2017. But due to some editing and other problems, it did not come out then. It was shot in 2017-2018 and was supposed to come out in 2019. But now it is going to release soon!! The first episode of Drama Serial Kasak will broadcast on ARY Digital in upcoming weeks.

it looks like a simple story, not the complicated stuff we see in the recent dramas, it looks more like the old dramas. Apparently, this drama serial looks different from other typical drama series. No LOVE TRIANGLE… No JEALOUS COMPETITION between sisters/cousins… No Depressing RONA DHONA and ABUSE…

This is the drama series of Iqra Aziz after Jhoti And Junaid Khan’s After Kashaf. The former drama serials of both actors are currently broadcasted on ARY Digital and Hum TV respectively.

People are loving the character of Junaid Khan due to the honesty of his character after marriage.

Are You Excited for this? Iqra Aziz and Junaid Khan fans are surely excited! Let us know in the comment section what do you think about their pairing?