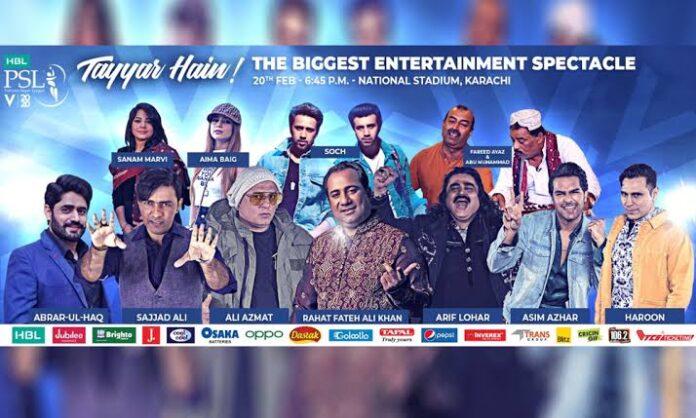 The opening ceremony of a league full of excitement and emotions is going to be held on 20th February, 2020 at the National Stadium, Karachi. The event is all set to feature 350 artists coming from different genres including sufi, pop and bhangra. An opening match will be played between the defending champions Quetta Gladiators and Islamabad United, after the one hour long program comes to an end.

Asim Azhar, Ali Azmat, Arif Lohar and Haroon will be rocking the stage with their energetic performance on the official anthem of PSL 5, Tayyar Hain. The list of some other charismatic personalities to perform on Thursday evening, includes Ali Zafar, Aima Baig, Atif Aslam, Rahat Fateh Ali Khan and many other super talented singers and performers. Moreover, Pitbull’s electrifying performance will surely glorify the evening.

Pakistan Super League has contributed the most in bringing international cricket back to Pakistan. And this time the whole tournament is scheduled to be held in Pakistan. The decided venues for the matches are Karachi, Lahore, Multan and Pindi. However, the final will be played in Gaddafi Stadium, Lahore.

PSL comes every year as a treat for all the cricket fans. This year, it is set to start with a glamorous opening ceremony. It will be a thrilling  experience to watch six well balanced teams competing with each other to capture the incredibly beautiful trophy.

We are eagerly waiting to witness an evening  overflowed with lit performances and a tournament packed with enthusiasm and patriotism.