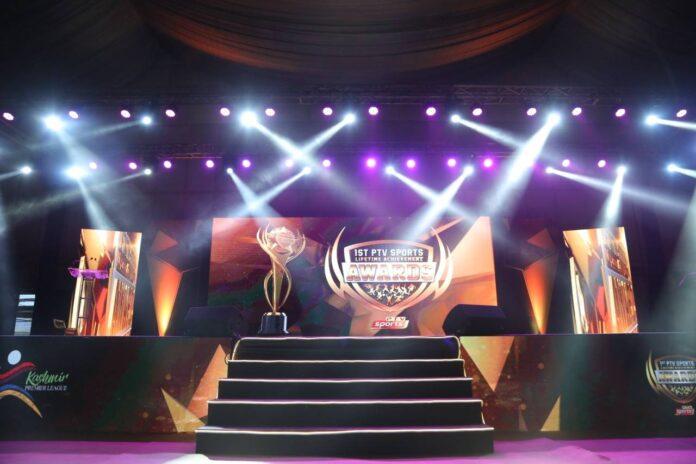 In a perfectly conceptualised event, six nominees in 21 categories were revealed. For the first time ever in the history of broadcasting any network has taken such an initiative. Six players from Cricket, Field Hockey, Football, Snooker, Squash, Tennis, Table Tennis, Badminton, Kabaddi, Swimming, Weight-Lifting, Basket Ball, Mountaineering, Sailing, Polo, Wrestling, Athletics, Boxing, Best Sportswoman, Best Sportsman, Best Sports Journalist/Commentator, besides in the Distinctions there will be twelve players from different sports rewarded for excellence (world records).

The ceremony started with Zainab Abbas & Shahzad Khan on an impressive set with strong aesthetics explaining the concept of arranging 1st PTV Sports Lifetime Achievement Awards to reincarnate the forgotten stars, to highlight that heroes never die, to reflect on how sports had integrated the society and also how with an early impact Pakistan had dominated the world. It is to provide a platform for future generations to get motivated and to move in life progressively.

It was an extremely well attended ceremony where MD PTVC dilated upon the need for such an activity and how PTV has been patronising sports in Pakistan. CEO of the Cutting Edge Group explained about their collaboration in hosting the awards and referred towards the main function to be held on February 18th, 2020 at the Convention Centre in Islamabad. The CEO of Cutting Edge Group also appreciated the efforts Jellyfish for their contributions to this event. He also explained the hosting in May-June 2020 of Kashmir Premier League.

Dr. Nauman Niaz Director Sports & Syndication of the PTV & a renowned anchor eloquently went through the sequence of events aired and produced by PTV since it’s inception in 1964 & its role of manifesting the true cultural values. He using his remarkable memory also discussed in comprehensive details the early of impact of great Pakistan sportsmen.

An elegantly made award trophy & medallion were unveiled and cake by pie in the Sky was cut as part of the celebrations. The show ended with breathtaking music, the songs sung by Sehr Ali Baga & Aima Baig.

Give us your thoughts about it in the comments section below!