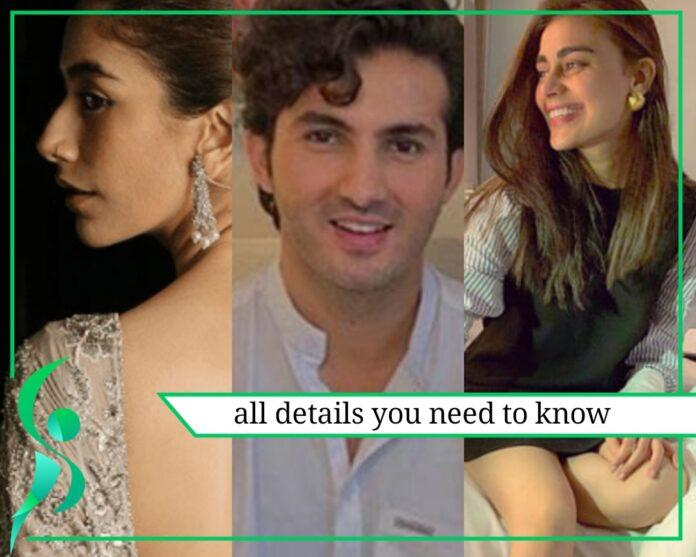 Sadaf Kanwal, a model turned actor, has just shared her views on feminism in an interview and the public couldn’t hold back on how offended they’re. Model turned actor, Sadaf Kanwal has previously gained a lot of negative attention from the public since she tied knots with Shehroz Sabzwari last year amidst the controversial dissolution of his first marriage.

Sadaf Kanwal and shehroz about Feminism

Shehroz and Sadaf face a lot of criticisms after their marriage. Some people think Sadaf is the main reason for Syra and Shehroz’s divorce, and some think that Shehroz cheated with Syra, but Shehroz didn’t accept this. He says that he was in a relationship with Sadaf during his first marriage. Shehroz tells so many reasons to marry Sadaf he said that Sadaf is a good and kind-hearted woman and he respects her. on May 31 the both Shehroz and Sadaf posted their nikkah picture with a caption of Alhamdulillah and complete. Shehroz also said he meets with Sadaf after six months of divorce between Shehroz and Syra. Shehroz, at that time, posted a video with Sadaf having a lovey-dovey conversation and said that we are just friends and working with each other.

HE also said that the most attractive thing about Sadaf is her honesty. Kanwal also said that Shehroz is the man whom I want him to be the father of my children. On a co with Nida Yasir, he also tells his first meeting with Sadaf he said that the Instagram feed of Sadaf is gorgeous and they meet with each other one or two times in a ceremony or an event they also tell their love story begins they flew to Norway for an event. Shehroz also said that before meeting with Sadaf his was going through many difficulties in his life, and he ended on falling in love with Sadaf. Shehroz and Syra have a cute daughter named Noorah. She was born in 2015. Shehroz also said that his intentions toward Sadaf are pure and honest. He also said they saw Sadaf as his life partner. After this statement criticized a lot of people, he doesn’t care about it. After this statement, Sadaf said I but people’s enmity they don’t affect us passed on us because such incidents also happen with us in the past. Shehroz also said that his fate has a major hand to unite with Sadaf. He also posted a video on his Instagram about the second marriage issue he challenged to prove to people that his first marriage ended due to a woman Shehroz also defended Sadaf and said she doesn’t deserve this behavior from people. In the good morning, Pakistan Show Nida Yasir asked Sadaf about the qualities of Shehroz, so she replied purity.

Shehroz said that he doesn’t want to divorce syra, but the circumstances between them are not right, so they divorce each other.

Shehroz felt proud of Sadaf for not being liberal in society. She added a beautiful picture on his first anniversary with the caption the happiest selfie of my life. Happy anniversary Shehroz Sabzwari. Sadaf received so many warm wishes on her first anniversary with Shehroz. he also said that he is a religious man and he stays away from the things that are forbidden in Islam.

On their marriage topic, Shehroz also said what a woman could do a man can’t do both man and women have to know their place Allah gives both man and woman some specific roles, and Allah made man and woman separate in response to Sadaf, she said that she has some rule which is the key of her the successful marriage she also said you should consider your husband your husband .he has a greater status than me because he is a man and I can’t compete with him. she also said a man could take care of things a woman cannot take care of as compared to man. He said some men Think of themselves as extraordinary and think their wives are not, while some women think that they are everything. I think both of them are absolute. When asked about Aurat March or feminism, she said feminism had become part of our life it is all because of liberty on her performance on the item number of a maledom afraid Shehroz said that he liked her a lot, but at that time he doesn’t know who she is he also said we couldn’t judge anyone. But as a colleague, he considered it nothing but worked .to clarify this matter, Sadaf explain Rabia butt statement Rabia, when you are younger, there are a lot of things that you don’t understand, and after the item number, I don’t wear that kind of clothes. When asked Sadaf about feminism, he replied, our husbands are our culture.

A clip of the couple’s interview is trending on Twitter and the public is all in to bang on Sadaf for her problematic opinions on feminism. When questioned about her take on feminism and if the women are oppressed in today’s world, the actor says, “women aren’t oppressed, they’re strong. I find myself very strong and I’m sure you do that too”.
As the discussion got escalated and she was questioned about Aurat March, Sadaf answered cautiously and wanted to avoid the topic. However, over insistence, she opened up and spoke out her problematic views on the subject. She said, “Our culture is our husband. I have to press his clothes that I don’t do but I should. I know where his things are and I know what he likes to eat. He should know that too but I am more responsible to know his likes and dislikes as a woman.” In her opinion, “The real feminism isn’t what the liberals of today preach but to take care of your husbands, to give them respect and do everything to keep them happy”.
With all the prevailing news of women being oppressed, murdered, raped and whatnot across the country, Sadaf’s opinions over feminism have resulted in the public outburst. People are upset about her views and calls them a mere representation of rather patriarchal and myopic interpretation.
Majority people aren’t happy with what she said and presume her statements to be highly insensitive for the women who are actually oppressed and struggling for the identity and rights for decades now. They believe that people like her do not have the stance to talk about such sensitive issues like Aurat Mach and Feminism as they cannot really understand the depth.

Well, not just the public is highly upset with the actor’s opinion about feminism and how she disregards the whole purpose of Aurat March by calling it an agenda of a few liberals, they’re also showcasing their anger in a humorous manner. Given that, none can beat the Pakistani memers in trolling.

While most of the public puts out their outrage to what Sadaf says about Feminism and Aurat March, some of them, a very few though, comes out in her support too. They find her comments upright and are relieved to see someone finally from the industry calling out the liberals.

“Women are not oppressed at all, in fact, they are very strong & Feminism is caring about husband & respecting him" #SadafKanwal thinks feminism is nothing more than a result of ‘liberals’ taking over. She is Right coz Reality can't be deny, more power to U brave lady 💯 pic.twitter.com/b5Wg3FgNEg

Though the whole nation is outrageous to what Sadaf said in her interview, Shehroz’s part of the conversation haven’t got a lot of light lately. The actor added quickly to his wife’s stance on Feminism that, “women also have their own realm just as the men”.” Men can’t do what women does and so is the case other way round. That’s exactly why God send down two different kind of people on earth”, he added.