Home Celebrities Sanam Jang reveals why her and her husband live separately! 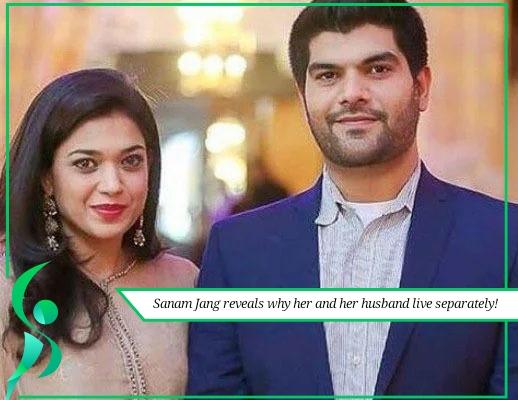 Sanam Jang reveals why her and her husband live separately! Speculations about Sanam and her husband Qassam’s separation had been rolling around in the media when the two were rarely seen together. The first thought that came to the public’s mind was that both had gone through divorce hence, living separately. But this was not the case, keep reading to know why the couple actually lives far from each other.

On a talk show called “Time Out with Ahsan Khan” Sanam sat down with the host and gave the actual explanation as to why both of them were not seen together as much.

She told Ahsan that her mother in law had started to receive calls regarding the separation and even her husband that lived in America was being called to know what had went down!

The real reason that the two were living far from each other is that Sanam’s husband has a job in America, meanwhile, his and Sanam’s daughter does not have the visa for America which is why Sanam lives in Pakistan with their daughter. She stated that she wouldn’t feel good about leaving her daughter to live here without her parents, that is why she stays with her!

Although, she had no reason to clarify the accusations, she still made an Instagram post stating that the rumors were false!

This is it for Sanam Jang reveals why her and her husband live separately! Keep visiting our website to learn more about Lollywood!