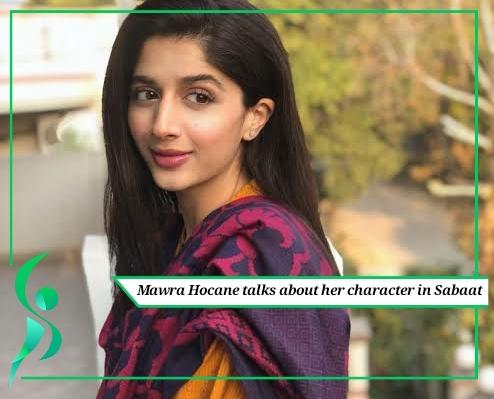 The star Mawra Hocane (Hussain) speaks about her on-going drama Sabaat, her chemistry with co-actor Ameer Gillani, and a lot more in her recent interview.

The actress is currently all praised for her character Anaya in Sabaat, gathering applause from all over the country. In a recent interview with an entertainment website, Hocane opened about love from people. She said, “Every project has its own place but yes, Sabaat’s feedback is not at all what we had assumed. Earlier, it happened with Sammi as well as Aangan but Sabaat is unique. I assume that something changes in an actor with each project but it’s been six months since I have stopped shooting for Sabaat and it feels as if I’ve gone through a personality switch. I can’t put a finger to it but I can feel a change in me.”

Mawra Hocane also talked about what compelled her to do Sabaat, “There was something very calming yet intriguing about Sabaat’s story. When I started reading it, I was eager to finish it so as to know what happened in the end. I can’t say that I saw myself in Anaya but I related to her… perhaps I felt there were a few traits of her that I used to have but not anymore. I came across a lot of reality checks,” she added.

The rumors related to Hassan (Ameer Gillani) is going to die, are going for a while now, and on the speculations, the Mawra Hocane answered, “Hassan is the heartbeat of Sabaat; he is the focus and all the characters are linked to each other through him. I don’t understand how do you expect that the story will move forward if Hassan dies,” she laughed.

“I have had the best on-screen chemistry with Ameer Gilani because I get along with him really well. Secondly, he was very invested in the serial and kept everyone else motivated to give the best performances.” Both of the actors knew each other before, and rumor mills are speculating that the two are dating each other.

Mawra Hocane also talked about her character’s evolution in the drama, “I feel women are inherently nurturers and homemakers. Anaya was a powerful and independent woman when she was alone and she is still all that but as she falls in love, she now feels safe and secure that there is someone else to protect her. I feel love does that to women. Having said that, I also like the fact that women in our society take claim of their relationships, especially after the wedding, and put in an effort to nourish these familial ties. Anaya wants to make it work and also doesn’t want to disappoint her husband (Hassan in sabaat),” she added.

The actress also told that she doesn’t have any scene with Usman Mukhtar in sabaat. Mawra Hocane also mentioned that she has purchased a home in Lahore, and is currently busy decorating it while enjoying the success of drama sabaat.