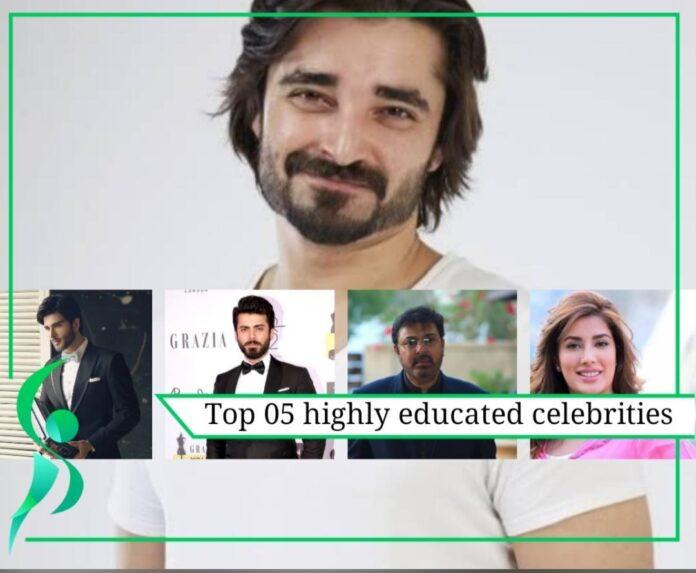 Showbizpakistan.pk reviewed the education history of most famous Pakistani Celebrities and brought you this list of the top 05 highly educated Pakistani celebrities. Don’t be surprised if they have chosen acting as their career at different points in their lives.

Many people dream of becoming a civil service commissioned officer, but Hamza Ali Abbasi dreamt of becoming an actor. It may be astonishing to you, but your all-time favourite Pakistani Celebrity, Hamza Ali Abbasi, was once a CSS officer before choosing to become an actor and pursue film as his career. Interestingly, he has served in the Police department until he left the job to follow his dream to become an actor.

This handsome hunk took acting as his career-long after graduating as an architect from the National College of Arts, Lahore. An architect in the film with the deadly combination of looks and skills melted a million hearts, Imran Abbas is the most loved Pakistani Celebrity.

The title “Actor in law” perfectly suites Noman Ijaz. The legendary Pakistani Celebrity, who started in the old times of PTV, is now a big name in the Pakistani media industry. Noman Ijaz showed guts to put aside his law degree from Quaid-e-Azam Law College and pursue a career in TV and became successful after a great struggle.

The girl from a family with strong roots in the Pakistani showbiz industry is a graduate of Karachi University. Still, she followed her mother’s footsteps and ended up as a national award winner Pakistani Celebrity with a stretched career in film and drama.

Acting is an art that is explored with time. That is why these Pakistani celebrities left their education to follow their passions. We have already seen their skills, and we believe they are the right people in the right place.

For more updates on your favourite Pakistani Celebrities stay with us!