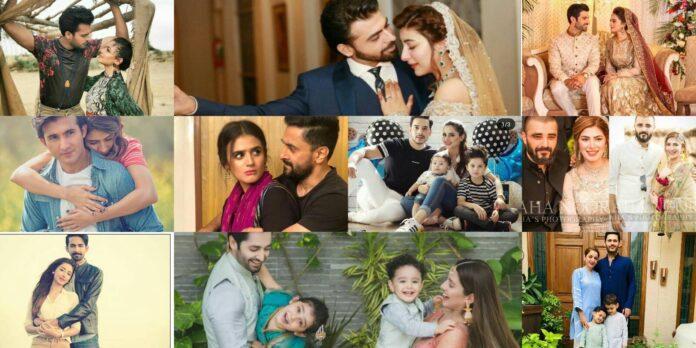 Many Pakistani Celebrities attracted towards each other while working together and got married. Here we have List of Top 10 Couples of Pakistan.

These two got married in December 2016 and seems like they’ve been in love since forever!

Blessed with two cuties, this stunning duo give us some major couple goals.

Hira has proved her excellent acting skills in blockbuster dramas like Do Bol and Aangan, and Salman aka Mani has worked in various sitcoms. Many times, they have shared screen and never disappointed us with their on-screen chemistry.

Ali Safina, who made his debut in 2015’s Pakistani film Jalibee, married fashion entrepreneur and actress Hira Tareen back in 2013.

Few months back, they welcomed their baby girl and they’re happier than ever!

Aiman and Muneeb tied the knot in November 2018 and which was the longest wedding of the year with a total of 8 events.

Since the news of Aiman’s pregnancy broke out, people are really eager to meet their baby girl!

Cosmetic Surgeon Fahad Mirza and film and drama star Sarwat Gillani always have us swooning over their relationship!

The Khamoshi actress Zara Noor and the handsome Asad Siddiqui got married in December 2017 and been melting our hearts with their love since then!

This is going to make your day!

This gorgeous celebrity couple has been married since 7 years and blessed with 2 beautiful boys. And we can tell that good looks surely run in this family!

And lastly, how can anyone forget this newly wed couple!? The most handsome Hamza Ali Abbasi and the stunning artist Naimal Khawar has recently tied the knot in a really simple yet elegant way.