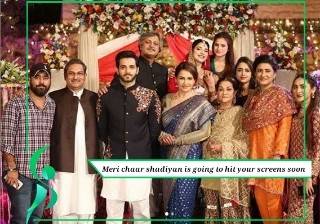 Since the beginning ARY Digitial is presenting top class dramas throughtout the history, along with the best storylines ranging from social issues in our surroundings to the complicated dynamics. The channel has achieved a remarkable number of viewers and has crushed all TRP records, leading it’s journey to sucess. The drama serials has not only raised the statitics but have also sparked many important debates on the cruel reailities of our society and means to overcome them. The Diversity and range in the drama’s content is one of the major reason behind the outstanding success of the channel.

Ramsha Khan is playing main role. She is an outstanding Drama and film actress and also a model who has previsously worked as VJ on Pakistani Television. She is in the industry since 2016 and made her platform during this glamour world without having an artistic background. Being born during a liberal family, it wasn’t much difficult for her to raise, showbiz. She gathered enormous popularity after her character in drama serial “Kaisa hai Naseeban” . Ramsha features a great to travel distance. She started her career in 2016 from the movie “Thora jee lai“.

Are you exicted to see them together?

Though the movie proved to be a big disaster on the box office yet it definately give her yet it definately gave her hype within the industry and shortly she started getting varous lead role in different channels. She played her small screen debut with TV serial as a supproting role along with most famous actors Ayesha Khan and Feroze Khan. Her character was praised by many viewers which gave her the advantage of blowing up fan following and to become more prominent in the pakistan television industry.

Wahaj Ali is one of the most charming pakistani actor and stunning model of our industry. He has been playing many different roles with famed personalities. In a very short period, he has melt down our hearts with his remarkable performance and has increased his fan following list. He is indeed of of the most handome and skillful actor of our industry. Inspite of belonging from non-artistic background he still manage to earn fame and love.