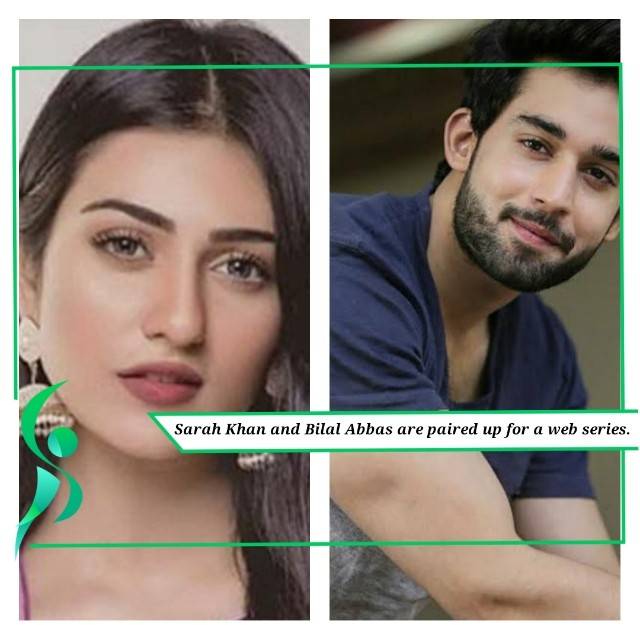 Sarah Khan and Bilal Abbas In a Web Series

News has it that young heartthrob of our state Bilal Abbas Khan and the very beautiful Sarah Khan are paired up for an upcoming web series. Both actors are adored by the viewers for their versatile characters. There is a list of successful serials on their acclaim. Web series are currently the talk of the town in the Pakistani entertainment industry. With podium like Iflix and Eros on the upswing among Pakistani audience, many production companies and directors are teaming up for it. They are driving away from the criteria our industry has established and taken advanced steps to build up their portfolio.

Currently, Sarah Khan is working for Hum TV serial MIRAAL in which she is portraying a negative role and Bilal Abbas is seen in PYAR K SADQAY in which he is seen playing a character of an innocent person.

In a recent live session with Something Haute, Sarah confirmed the news of pairing up with Bilal Abbas for an upcoming web series. She also told her fans that approximately 50 percent of the work is done but due to the unfortunate situation of the corona pandemic the shooting has been stopped and will resume once the condition is satisfactory. She quoted:
“I have signed a web series and we have done almost 50 percent of the work,” said Sarah.
She further added that Anjum Shehzad will be directing the web series while Bilal Abbas will share the screen with her as a lead protagonist. Speaking about her character and plot of the web series she said that it is dissimilar from her prior roles and narratives and she is motivated for her new project.
“The story is very different from the normal stories, it is all about fantasy. The girl lives in an imaginary town, all the people are imaginary.”
The category of the web series is centered on “Fantasy” which is quite a transformation from the usual storyline we have seen throughout the years.

Bilal Abbas also confirmed the news on his twitter account and told his fans that the shoot was taking place in Lahore. He also shared a picture with his co-actor Sarah Khan. But the young actor chooses to not disclose his character.

The name of the web series is not publicized yet by the crew but the fans of both the actors are quite happy with this update and willingly waiting for their web series but only time will tell about the pairing and story. Will it be able to generate noise in the industry like ENNAYA, which was directed by Wajahut Rauf starring Mehwish Hayat and Azfar Rehman in the lead roles. Only time will tell but till then we wish both of these fine-looking actors best of luck for their upcoming web series.

What do you think about this fresh pairing ? Tell us in comments below .