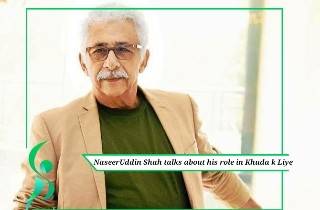 Naseer Ud din Shah, The veteran Indian actor talks about his negligible character in the Pakistani film “Khuda K Liye”.
The much-hyped and valued Pakistani film “Khuda K Liye” was released in the year 2007, under the acclaimed direction of Shoaib Mansoor featuring Shan Shahid, Fawad Khan, and Iman Aly in pivotal roles, with a cameo presence by Naseer Ud din Shah. The film’s storyline revolves around two brothers whose life experience a change after the 9/11 occurrence in the United States of America and misconception of Jihad. The release of the picture was historic because of two reasons: It was the first film released in India almost after half a century, and secondly, it was included as the first-ever official selection from Pakistan in the International Film Festival of India (IFFI).

The 70-year-old performer during an interview with IANS, open about his character and his purpose while essaying it.
“It is not always the character but what the intention behind telling the story is that matters the most,” Shah said.
The Dirty Picture actor further narrated about his family upbringing, how he hailed from a family with extreme and traditional principles that set up quite a few queries in his thoughts about his faith and the true meaning of the religion Islam.
He went ahead to explain that: “Those thoughts used to disturb me as a growing adult. I was like, ‘but my friend KC Singh is such a nice fellow, it was not his decision to born a Hindu, so why would he go to hell?’ We do not choose our parents and the religion we are born into’. Why should music be banned?”
Naseer Ud din Shah went forward to say that the Fawad Khan starrer film answered all his questions and misconceptions about the religion Islam, therefore he reasoned it worthy enough to jump on the project.
“All those questions were addressed in Khuda Kay Liye. So, as an actor, I had to agree with the ideology that the story was showing, not necessarily the character that I was portraying.” Shah concluded.
The character portrayed by Naseer Ud din Shah was named Maulana Wali which was applauded widely by the critics of both the countries, India and Pakistan.

Have you watched the film? Tell us your opinion about Shah’s appearance in Khuda K Liye. Reach out to us in the comments below.