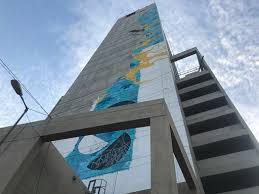 The city of light of Pakistan “Karachi” carrying its scars not so strongly, lately, luckily gained one more honour of having world’s tallest moral with a beautiful message in itself.

The mural is part of the project that is an initiative of the International Public Art Festival (IPAF) under I AM Karachi (IAK), in collaboration with the Consulate General of Italy, TPL Corp and Berger Paints.

Related to this, Italian Consul-General Anna Ruffino said the mural is a message of peace and friendship, as well as a cry of alarm for the environment, adding that it also highlights the environmental hazards the city is facing. “The subject is, in fact, the conservation of the mangroves forest in Pakistan, especially along the coast.” The mural reflects Karachi’s coastline and that the mangroves are endangered.

Percivati took about nine days to paint but the planning and preparation were going about for months. He said that he cannot take all the praise for the mural because a lot of people are involved.

“Karachi is a beautiful city but has been neglected a bit. It’s called the City of Lights but sometimes it’s more like a city of dust. People of Karachi are beautiful. The city can be as beautiful as Milan, Rome or London,” he laughed.

He wished to return to the city again with more schemes. “Karachi is a beautiful city, but it has been sort of neglected a bit. Sometimes it’s like — I don’t want to offend anyone — the city of dust,” he added.

IAK Executive Director Ambareen Thompson announced that the IPAF will be held at the NED University of Engineering & Technology from February 7 to February 13.