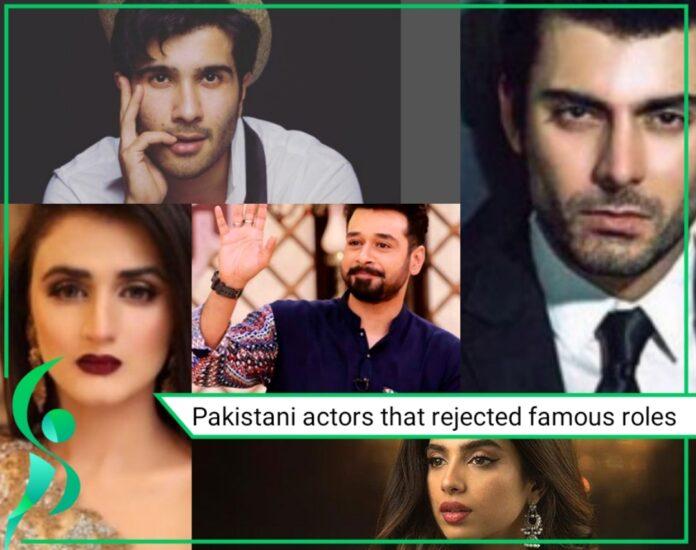 Since the showbiz industry is extremely vast and diverse, many actors get offered different roles. Some also turn down these scripts due to other reservations but the serials still prove to be a successful hit! So today we’re bringing you the list of 5 Pakistani actors that rejected famous roles!

The very famous Kashf actress “Hira Mani” was offered the script of the Hania Amir leading drama Dil Ruba but she decided to turn it down and do Kashf instead, and no doubt she’s playing the role fabulously! We feel like seeing her as Sanam would not have been a pleasant experience, atleast for us 😀

The multi talented “Sonya Hussyn” was asked to shoot next to Humayun Saeed in the hit serial Mere Pass Tum Hou but she had to turn it down as she felt that the character of Mehwish painted women in a negative light.

We all now know how perfectly Mahira and Fawad portray roles next to each other and this is why “Fawad Khan” was considered as the first choice to play Irtiza in Bin Roye movie and drama serial next to Mahira. Unfortunately, he had to turn down the role due to his projects in India.

“Feroze Khan” was also one of the rejectors when he turned down the script for Mere Pass Tum Hou, the reason he did so was that he thought the writer Khalil Ur Rehman Qamar was very arrogant and this si how Humayhun Saeed became the face of the famous serial!

“Faysal Qureshi” was the first choice when the casting for the very famous drama Humsafar was going on. He had to reject the script as it was just not for him and also Qureshi is not very comfortable playing romantic roles on screen. Hence, Fawad Khan did the role of Asher.

This was all for our article about Pakistani actors that rejected famous roles!!

Which one of these did you find shocking? Let us know in the comments below

Don’t forget to visit Showbiz Pakistan for all the newest celebrity news and updates!