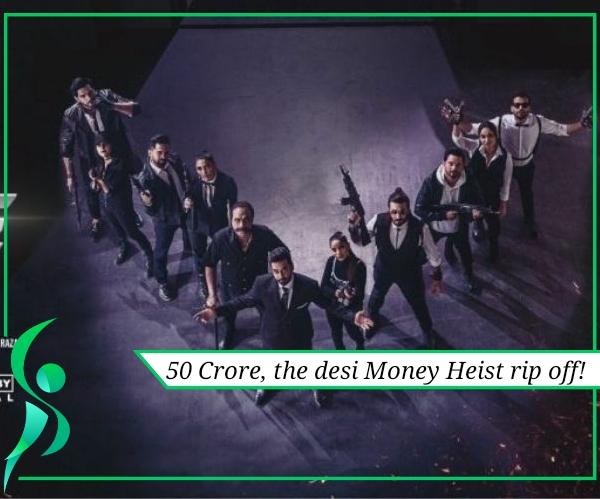 On 18th of October, several Lollywood actors and actresses started posting pictures of their mugshots and we saw Instagram posts of the people dressed in orange jumpsuits as well. The audience couldn’t help but catch a similarity between the characters, all of them looked like the actors in the Spanish season “Money Heist” or “La Casa De Papel”. They even had their names based on cities of Pakistan as the Money Heist characters had been assigned. And the people just went bonkers over the fact that it looked like the desi Money Heist rip off!

The 50 Crore project has a BIG cast! and by big we mean 12 people. The confirmed cast that we know of right now consists of Mehmood Aslam, Zhalay Sarhadi, Aijaz Aslam, Omer Shahzad, Faryal Mehmood, Saboor Aly, Anoushey Abbasi and few more of the fresh faces that we see on TV.

The front man that we think is inspired by the “brain” of the heist, Professor is being played by Faysal Qureshi. The name of Qureshi’s character is “Cheif” as we had seen sloppily written on his mugshot and it seems like he will be the one initiating this whole plan.

What it really is…

Now, after a lot of good/bad reviews of the characters, it is being said that this big cast surprise or the desi Money Heist will not be a movie or a series but it actually is an ad promotion for an online application that will be releasing soon! It is also being said that the similarities were made obvious delibirately so that it could rope in as much target audience as possible.

Pretty smart move if you ask us. IF this is an ad promotion, The Desi Money Heist really did turn a lot of heads! But the rest of the story will only be known for sure when the actors let us know what all this is really about! We just gotta wait a little more.

That is it for today! Visit our webpage for more Lollywood news and masala content.