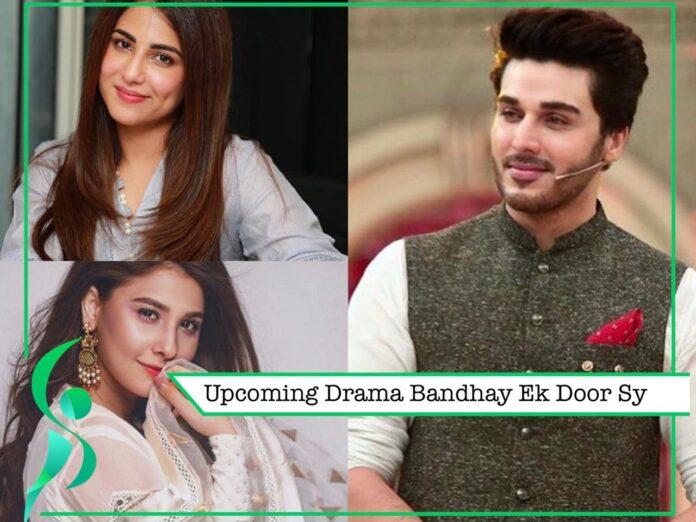 The current show “BOL Nights With Ahsan Khan’s” famous host Ahsan Khan is back with the bang at least it seems like that. We are going to see him and a lot of other talented stars in the upcoming drama called “Bandhay Ek Dor Sy” under the production of 7th Sky Entertainment. The teasers of this upcoming drama are really exciting and effortlessly generating curiosity among the audience. And we are one of them.

This star-studded drama is everything we need in this time period. This upcoming drama stars Ushna Shah, Hina Altaf, Madiha Rizvi, Saba Hameed and Saba Faisal. Not just it’s teasers are quite amazing but people are obsessed with it’s OST as well.

It’s quite evident from its teasers that this is a romantic drama but the actor in his latest interview discloses a little story of the drama which is quite opposite from our assumptions. He said,

“This serial is a family drama centered around the life of a single-family with eight to 10 members.”

He further added that Bandhay Ek Dor Sy does not revolve around the actor and actress mainly, he said: “

It’s not centered around a guy and a girl; there’s a love track, of course, but that’s not all it’s about. It includes the character of my dadi, played by Samina Ahmed, as well as my taee, played by Saba HAmeed and my mother, played by Saba Faisal.”

He also said this this play is a simple and exciting one, He uttered:

“Its a nice family play. I would call it a simple story, with well-knitted small moments, small gestures in the lives of in the middle class joint family.”

PICTURES FROM THE SETS OF BANDHAY EK DOR SY

Saba Faisal shared posted a cute picture with Ahsan Khan and Ushna Shah from the sets:

In the following picture whole cast is posing for a groupfie.

This picture of Hina Altaf and ahsan Khan form behind the scenes is really cute.

Fans of the cast of upcoming drama Bandhay Ek Dor Sy couldn’t resist themselves to make their signature collage.

Ahsan Khan and Ushna Shah are smiley for this shot from the sets.

Everyone is desperately waiting for this drama serial and mould them in all the twists it has. Looking forward for the positive as well as interesting episodes of this exciting project filled with talented actors.