Home Celebrities Aima Baig was invited for the Big Boss 13 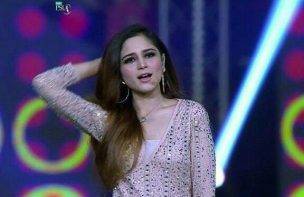 Aima Baig was invited to the Big Boss 13, but she refuses the proposal.

Aima Baig is Pakistani talented singer and scriptwriter. She is gifted with versatile voice. In her fan calling there is Pakistanis along with international following because of her euphonious voice hitting everyone hearts.

According to the details, in her interview she revealed she had a call to attend the Big Boss 13, though she rejected the proposal.

Aima is a well-known singer of Pakistan, who have sung many famous songs for dramas and films. She also perform in Coke Studio. She said that she was surprised by the call from the Indian reality show.

Big Boss is Indian reality television game show, hosted by Bollywood actor Salman Khan. In the show celebrity have to spend 3 months in house with no connection with outside world.

She said that Big Boss just looks good to see but can never think of taking part in it.

In the previous seasons, Veena Malik also took part in the show. She got fame along with a great touch of criticism.