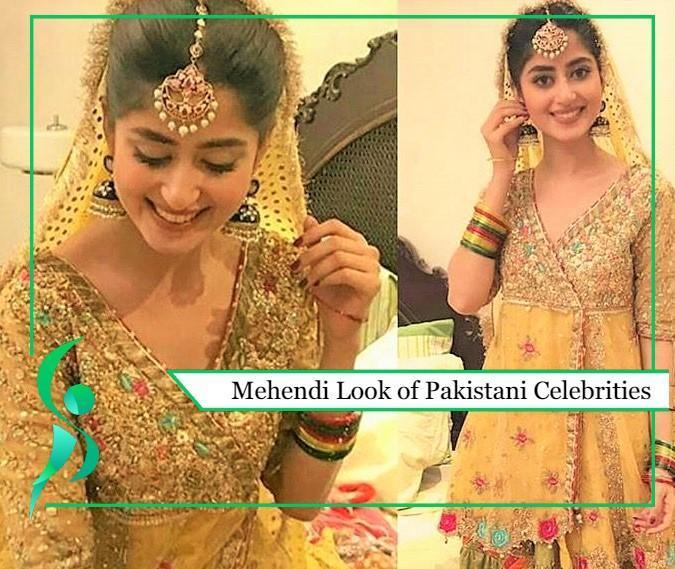 Mehendi day is viewed as the best time and vivid capacity. In Pakistani weddings, the loved ones anticipate the mehndi work more than some other. It is a day when individuals sing and move not at all like Barat and valima when there is no such action. Pakistani big names have begun another pattern of wearing progressively formal looks on their big day.

Like some other young lady, all the big names in this rundown did whatever they could to put their best self forward and they looked totally bewitching on their enormous day.

These celebrities looked gorgeous on their mehndi.

Hina Altaf and Agha Ali’s wedding came as a complete surprise. Although there were rumors circulating around that they were in a relationship but both of them gave statements that they were only good friends. When their wedding picture surfaced, people were happy and surprised at the same time.

Iqra Aziz decided to wear a stunning all yellow outfit which was really pretty. Her entire look was perfect from her tied hair to make-up that was on point. Iqra Aziz flaunted her beautiful dress and we can tell that she loved her overall look just as much as her on lookers. Iqra also wore a lot of mehndi on the occasion, which made her overall look even more appealing.

Aiman Khan’s look on her mehndi was completely different from that of her mayun. She wore an off white short blouse with a heavily embroidered colorful lehenga. Her dupatta too was detailed. Aiman Khan also wore a lot of jewelry. She enjoyed getting all dressed up for her mehndi and made sure that she looked ravishing. The colorful bangles also look exceptionally appealing. Aiman Khan’s overall look went perfectly well with the decor on her mehndi which is why the photographs came out so beautiful.

Saniya Shamshad kept all her looks highly festive at her wedding. She herself posted on social media that she was not expecting her mehndi look to be this grand. Her friends kept on giving her different ideas and the end result was a look which was grand and gorgeous. Saniya Shamshad Mehendi’s look can easily be passed as someone’s valima look as well. Her make-up, jewelry and dress was heavy but she looked stunning.