Home Celebrities End of an affair! Asim Azhar and Hania Amir unfollowed each other 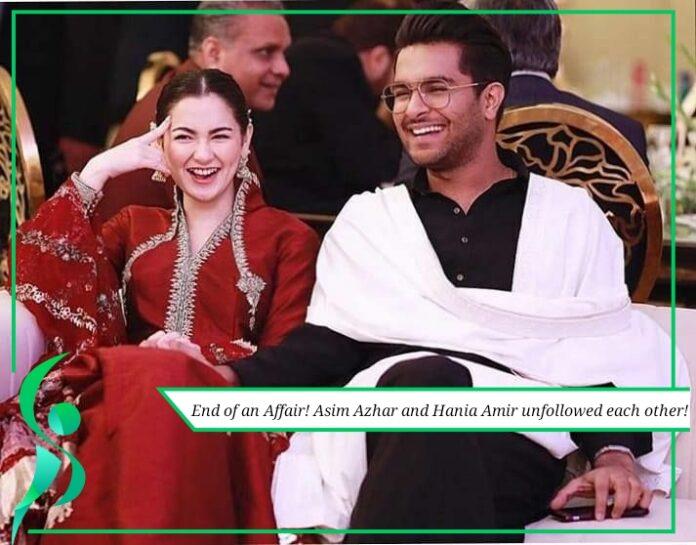 It is the end of an affair for the very famous young lollywood couple Hania Amir and Asim Azhar. They have made rounds on social media quite a few times, wether it be big birthday celebrations or lovey dovey comments on each others instagram posts both of them have remained very vocal about expressing love for each other. But this time they might be done with each other for good! Keep reading to know why.

End of an Affair!

Although Hania had recently told everyone on a live session with Aima Baig that she and Asim were not dating and were best friends, we still knew that both of them were still very close to each other and hung out every once in a while too. But this time it seems like even the “friendship” they had has found its way to an end!

The news spread over on Instagram that the once power couple had un-followed each other! This took us by surprise as Hania had previously stated that the two of them were still good friends. To make sure this was true, we had to check for ourselves if the news was true or not and unfortunately the young lovers infact have unfollowed each other on the Gram! And we can surely say that it really is an end of an affair for the two!

The reason is quite unclear right now as to why Hania and Asim did so but Yasir Hussain took the opportunity to taunt them in an Insta Q/A session when a fan asked him what he thought about Hania and Asim 😀 Take a look for yourselves!

What do you guys think about this situation? Did you guys ship Asim and Hania together? Let us know in the comments.