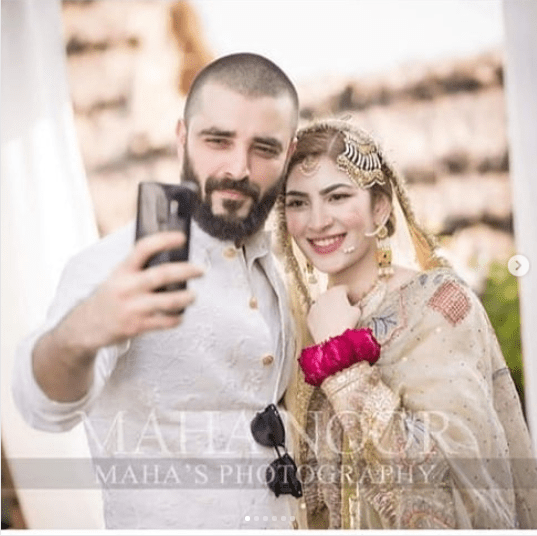 The nuptial ceremony of  ‘Pyaare Afzal’ star, Hamza Ali Abbasi and Naimal Khawar  who is brilliant visual artist and also recently  made her debut in a drama ‘Anaa’ held on 25th August.

The social media flooded with rumors on the Tuesday night and made everyone baffled, Hamza confirmed the news  by releasing the statement saying that he wanted to disclose this after 25th but the news got out so he had to reveal it, he added that there was platonic and halal relationship between them and also they are inseparable.

The heart throbbing couple kept their nikah ceremony small and simple. . Naimal wore her mother’s bridal dress revamped by Maheen Shah, with light makeup and heavy jewellery she looked beautiful as she is.  The dhula miyan kept it simple  in white shalwar  kameez  with ‘kala chashma’ on. The venue was ‘The Monal’ in Islamabad.

Everyone can’t stop themselves  adoring and congratulating them.

Happy couple, their faces are telling how happy they are,  Masha Allah

And obviously with friends also

Oh my heart! the hand in hand after nikah feels..

People are appreciating them for encouraging the modest marriage and nikkah culture.  All our well wishes are on the way….