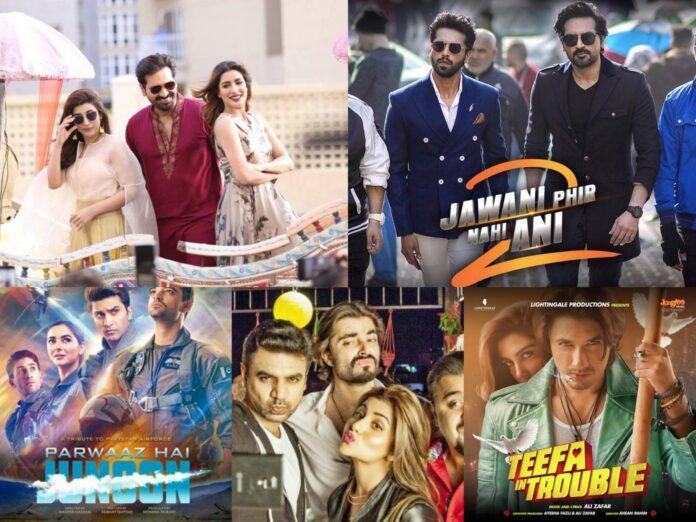 Directed by Haseeb Hassan, Parwaaz Hai Junoon made a worldwide gross of over 3.4 million US dollars. It features Hamza Ali Abbasi, Hania Amir, Ahad Raza Mir, Kubra Khan, Alamdar Khan and so on. This film is a tribute to Pakistan Air Force.

This unfolds on parallel timelines with the back-story and present-story where Sania (Hania Amir) goes from being a girl who is terrified of flying on airplanes to being a high achieving fighter pilot. This change was solely due to the overwhelming passion she observes in a valiant fighter pilot Hamza (Hamza Ali Abbasi) who is inclined to sacrifice his life for the nation.

However, this film gives an insight of the life of a fighter pilot and the challenges and hardships they face. Parwaaz Hai Junoon starts on a lighter note but gets intense over time. The nationalistic vibes were felt throughout the movie with emotional rollercoaster ride, and light humor. This film is inspirational for young minds and encourages them to get through the hardships and attain their dreams.

This story starts with the three friends who are in miserable marriages and wants to escape their wives. Their friend Sherry (Humayun Saeed) who is a divorced lawyer returns to Pakistan from United States and after finding out his friends’ condition, wants to take them to a vacation. He takes them to Bangkok whereas tells their wives’ that they’re going on a road trip to Khyber Pakhtunkhwa. In Bangkok, the story unfolds along with elite humor, great acting and wonderful locations.

Although Humayun Saeed seems a bit old now for boyish roles but he pulled off his character really well in this film. The other boys Vasay Chaudhry, Hamza Ali Abbasi and Ahmed Ali Butt were also quite impressive with their acting. JPNA is a witty blockbuster and knows how to keep their audience engaged throughout the movie!

NO 3: TEEFA IN TROUBLE

Teefa in Trouble is a 2018 film directed by Ahsan Rahim and made a worldwide gross of 3.5 million US dollars. This romantic action comedy movie has its leading characters; Ali Zafar as Teefa and Maya Ali as Anya.

The story starts when Teefa (Ali Zafar), a Lahori gangster is sent to Poland by Butt Sahab (Mehmoon Aslam) to kidnap his friend Bonzo’s (Jawed Sheikh) daughter Anya (Maya Ali) for the purpose of marrying her to Butt’s son. Then the troublesome and adventurous journey of Teefa and Anya starts.

Overall, the movie was quite hilarious with the right amount of humor at the right time, but there were some drawbacks too. The leading roles were devoid of on-screen chemistry which resulted in lack of romantic element. Also, the length of the movie was also a nuisance. It could easily be cut to avoid making it unnecessarily long. However, the characters were fit in their roles and did not dissatisfy with their acting. This movie is a full package and is a strong recommendation for everyone who loves some family entertainment.

Punjab Nahi Jaongi, released in 2017 and directed by Nadeem Baig made a worldwide gross of 4.4 million US dollars. This movie’s cast includes Humayun Saeed, Mehwish Hayat, Urwa Hocane, Azfar Rehman, Ahmed Ali Butt and so on.

Fawad (Humayun Saeed), a wadera’s son from Faisalabad and Amal (Mehwish Hayat), a town girl used to the life of Karachi, both have graduated from college, but while Amal has a degree in Economics from London, Fawad has done MA in Political Science from a local institute.

Beeboji, who is the most respected in both their families and the decision maker for both of them, wishes to get Fawad and Amal married to each other. Fawad, who is dead set on finding himself a ‘Heer’ instantly falls for Amal when his mother shows him her picture. Then comes the romance, drama and conflicts.

The supporting roles of Ahmed and Urwa were played immensely well. Shafique (Ahmed Ali Butt) provided comic interludes between the disputes and Durdana (Urwa Hocane) who was the typical cousin had feelings for Fawad and as predictable, she created problems between the newlyweds. No doubt, she did justice to her role and gave quite a good performance in her character.

This family entertainer is a must watch which will not disappoint you with its comic moments.

Jawani Phir Nahi Ani 2 is the highest-grossing Pakistani movie with a worldwide box-office gross of over 5.0 million US dollars. This humorous movie keeps you curious and can make you laugh till the end. It is directed by Nadeem Baig and stars Fahad Mustufa, Humayun Saeed, Vasay Chaudhry, Ahmed Ali Butt, Mawra Hocane, Kubra Khan, and so on.

This sequel picks up the story of the first movie, few years later where two friends Pervaiz (Ahmed Ali Butt) and Sheikh (Vasay Chaudhry) along with their wives are set to fly off to Turkey where they have to attend the wedding of Pervaiz’s brother-in-law, Rahat (Fahad Mustufa) with Zoe (Mawra Hocane), the daughter of a successful designer. There, the boys are surprisingly reunited with their friend Sherry (Humayun Saeed) and then their journey is more delightful than that of the prequel.

In this part, the leading role was shifted from Humayun Saeed to Fahad Mustufa who did a really fantastic job in his performance. However, there are certain loopholes in the film and it focuses more on dialogues than the main plot itself. But, if your main preference is comedy than Ahmed Ali Butt and Vasay Chaudhry did a great job in making it worth a watch, as these two were the two main reasons of comedy in this film.

Overall, if your only intent to watch a film is enjoyment, then you will not be disappointed with this movie.