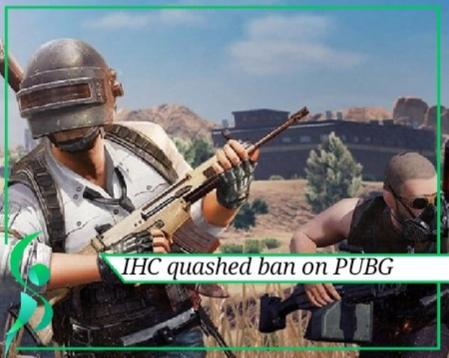 The Islamabad High Court (IHC) has quashed the Pakistan Telecommunications Authority’s (PTA) decision this month to ban the video game ‘PUBG‘, meaning ‘Player Unknown Battle Grounds’, and to reinstate it immediately. Has ordered Justice Amir Farooq of the Islamabad High Court passed the order at the request of a company controlling the PUBG game in Pakistan. It may be recalled that on July 1, the PTA had decided to temporarily ban video game PUBG.

The PTA stated that the video game had been temporarily banned following complaints from various sections of the society. “These games are addictive, a waste of time and have a negative impact on children’s physical and mental health,” the complaint said.

According to a PTA statement, recent media reports also say that the game has led to “suicides“.

A few days before the game was banned, Lahore police claimed that two youths in the provincial capital had committed suicide after being banned from playing the video game ‘PUBG’.

However, since the game was banned, there have been several trends on social media in which users have been asking for the ban to be lifted from PUBG.

What’s in the PUBG game?

The game is played under a mission in which the enemy is confronted and guns are used for this purpose.

A PUBG user said, “We can play the game alone and more than one person can join it.” So in order to defend ourselves, we have to beat the enemy and win the game.

He further added that he plays this game on the computer and “because this game is running online, you can’t leave this game anywhere in the meantime.” Even if you are going to eat or get up for any work, the other party will kill you.

The user added that there are two types of this game. One is what is played on the computer and the other is what people play on the mobile.

In the PUBG game played on mobile you have many options such as you can change clothes and your weapon.

This game is played all over the world due to which complaints about its negative effects have been received from all over the world. Another feature has been introduced in the game which helps you to know that your screen time has become too much. So close the game now.

But it is now up to the player to stop it on time or keep playing.