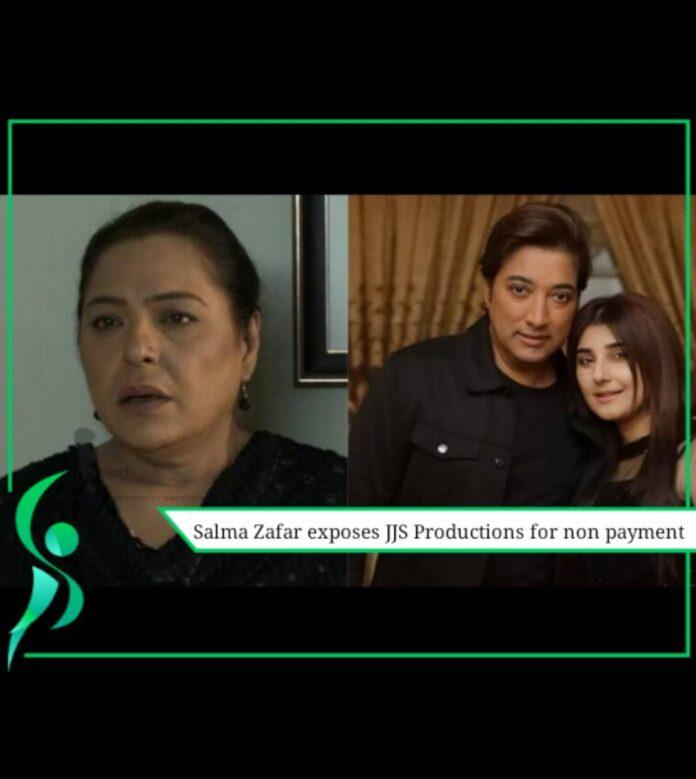 Salma Zafar, a veteran actress who paved her way in to the industry in the early 80’s through stage shows has been a big part of the media since. She is mostly known for her role in the drama ‘Yeh Zindagi Hai” that aired on Geo Entertainment through 2008 to 2013. Recently, she had been seen selling jewelry in online groups on Facebook to earn some money for herself which raised a lot of questions for the people.

On a recent live session that Salma did for her fans and viewers, we got to learn a lot about the envoirenment over at JJS Productions. Salma exposed the husband wife dua Javeria Saud and Saud Qasmi for not paying her for her roles in multiple serials that were produced by their production company. She even told the viewers that the actors working on their sets were not allowed to have more than one cup of tea and were asked to provide with their own sugar, tea and milk just so they could have more tea on a tiring day.

In this live session, Salma exposes JJS Productios for various reasons. She even went on saying that they owed Salma over 1 corore rupees for the 6 years she worked for them. Other than this, the production house is said to not even pay their low wage workers that used to come to the sets on public transport.

In our opinion, it is sad to see such a brilliant veteran actress being treated in such a low manner. She has been waiting for the two to pay her since her last show “Yeh Zindagi Hai” ended and is yet to receive her share.

What do you have to say about JJS Productions? Let us know.