Home Trending Now Seems Like Khalil-Ur-Rehman Landed In Another Controversy. 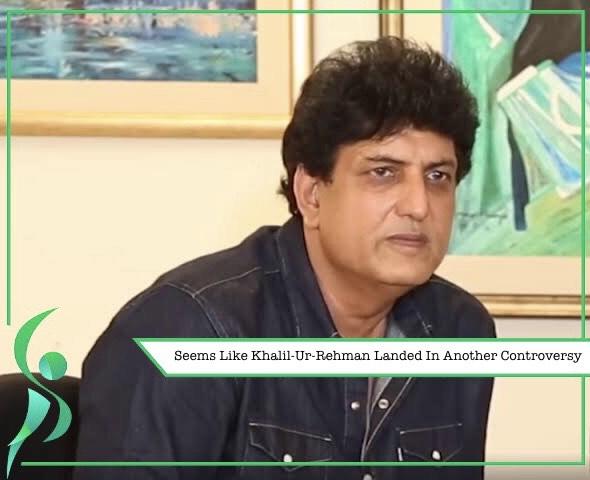 Well, Khali-Ur-Rehman is undoubtedly an outstanding playwriter. He has written so many popular and must say hit dramas like “Merey Pas Tum Ho,” “Alif,” “Pyaray Afzal,” “Mera Naam Yousuf Hai,” and so many more. His writing is not only for dramas, but he has also written a super hit Pakistani movie called “Punjab Nhi Jaoungi.” If Khalil-Ur-Rehman is known for his writing of popular dramas, then so does the people know him for always speaking his heart out. Most of the time, his point of view is always opposite from the majority, but nothing lets him hold back his opinions. He always says what he finds right and is right, according to him.

Lahore motorway incident has left all of us in deep grief and made us realized how usually sexual abuse on the girls and women is going on so many years, yet none decent has taken from the government. So, that the monsters who desire to do all these quit doing it. Due to that, many Pakistani in Lahore stepped out in Lahore near Liberty Chowk for a protest as a wake-up call for the government. This act was taken just to show the anger and sadness over how our government is not taking any steps for them. Well, now, coming to the main point in this protest, there are so many or 70%-80% female’s majority.

So, in an interview of “Bol,” which is claimed as Pakistan number 1’s TV channel, when the host questioned Kahlil-Ur-Rehman for his opinions on the latest protest against rapes and sexual abuse that happened on the Liberty Chowk. To which the reaction of Khalil-Ur-Rehman wasn’t unexpected, he said:

“I am surprised because of all the females attending the protest in Liberty chowk. I wonder where are there brother and father are, and even if they are still where they allowed them to attend the protest.”

He also further added, “What kind of more freedom do these women require? Do they want to go into the room with their boyfriends and want there father to stand outside as a guard? Or want their brother to protect her outside the room telling on the phone that his sister is busy?”

He also further added, “What kind of more freedom do these women requires? Do they want to go in the room with their boyfriends and want there father to stand outside as a guard? Or want there brother to protect her outside the room telling on the phone that his sister is busy?”

Khalil-Ur-Rehman later questioned every women who attended protest that it is constitutional right that taking the name of freedom and curse every father of the this nation along with your own father?

These were few of the highlights of the interview. If you want to watch the whole interview then the video is given below.

Obviously there are lots of people who will agree with him while there are millions of those who won’t. And when it ocmes to Khalil-Ur-Rehman there are so many people just can’t stand his choice of words. reaction of his opinions and point of views are always on the twitter. Out of which some of them are shown below:

Some called him the real enemy:

Some said his opinions does not matter as his comment are totally no credential for such a serious issue:

Some were really mad on media for letting his even come out and being source of his voice.

What are your though on the point of view of Khalil-Ur-Rehman? Are your with him or against him? Do tell us in the comments section as we want to know your opinion as wel.