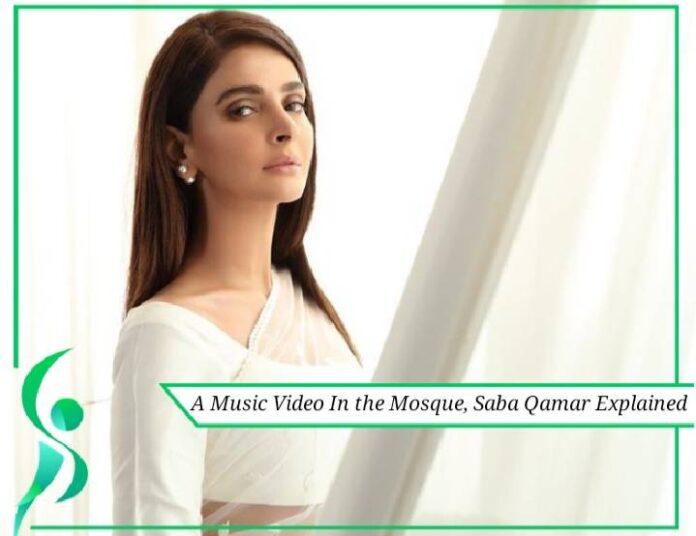 The video of singer Bilal Saeed and actress Saba Qamar’s new song shooting and dancing at Wazir Khan Mosque has been criticized on social media and the artists’ move is being strongly condemned.

The video of the song of actress Saba Qamar and Bilal Saeed has gone viral on social media. The song was filmed in the historic Wazir Khan Mosque in which the sanctity of the mosque has been violated.

Consumers were demanding action from the government, with the artists apologizing for hurting people.

Saba Qamar, the actress and director of Bilal Saeed’s new song ‘Qabool Hai’, responded to the criticism after being subjected to severe criticism.

On social networking site Instagram, the actress released a teaser of the song with a long caption, saying, “The mosque administration was also present during the shooting and they are witnesses that no music of any kind was played there.“

He said, “This is the only part that was filmed in the historic Wazir Khan Mosque. It is the introductory part of the music video which shows the scene of the marriage.” It was not filmed with any kind of playback music, nor is it part of the music track.

Saba Qamar wrote that the management of the mosque was also present at the time of filming and they are witnesses that no music of any kind was played there. The full video of the song is coming out on August 11.

The actress wrote that the BTS video which went viral on social media was just a click away from the poster of ‘Qabul Hai’ in which the married couple was happily shown after their marriage.

“Nevertheless, if we have unknowingly hurt someone’s feelings, we sincerely apologize to you all,” Saba said.

The actress said that the video of ‘Qubool Hai’ will be released on August 11.

On the other hand, singer Bilal Saeed explained, “Please watch the video before you reach any conclusion. And understand that we are all on the same page. “

Bilal Saeed wrote that we are all Muslims, we have as much love and respect for our religion Islam in our hearts as you all have in your heart and you can never think of insulting it.