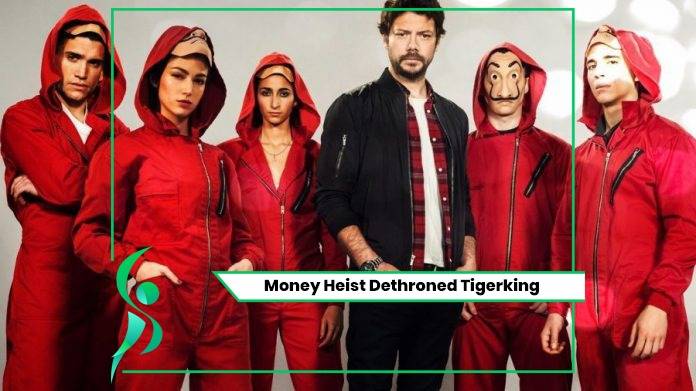 According to the latest surveys by Netflix, Money Heist aka La Casa De Papel, the famous Spanish series, has become the most watched show on the online streaming platform. Money Heist’s popularity has surpassed that of a very famous series, Tigerking.

As per the report of Netflix, Money Heist’s fourth season had a viewership of screaming 65 million across the world which easily tumbled over that of Tiger King, which sat on a record with 34 million views in the first 10 days of its release. Part of the success of Money Heist’s success can be associated with COVID-19 lockdown as the famous series 4th season released on 3rd April when all the people around the globe in a self-isolated lockdown because of the growing threats of coronavirus. Meanwhile, season 5 of Money Heist is expected to be released on April 2021.

From April 3 to 5, La Casa de Papel was 31.75 times more in demand than the average series globally, beating out such perennially popular series as Game of Thrones, The Walking Dead, and Westworld. The data firm is the leading global content demand analytics company for the multi-platform TV business. With the world’s largest TV audience demand datasets, the company currently tracks more than 1.5B daily expressions of demand in over 100 languages from 200+ countries.

La Casa de Papel is a wild ride. The series first began with eight thieves taking hostages and locking themselves in the Royal Mint of Spain as a criminal mastermind manipulates the police to carry out his plan. From there, complexity abounds. Perhaps Parrot’s findings shouldn’t come as a surprise. Season 1, which hit Netflix in 2017, was hailed as the first mainstream heist series on Spanish television. It was developed by screenwriter Álex Pina and director Jesús Colmenar and specifically designed to upend conventions and expectations associated with the genre. Through the surrealist elements that bend reality, the red motif that provides a visual aesthetic, and the assortment of time-jumps, flashbacks, and unreliable narration, it was clear that La Casa de Papel was determined to be different in form and function. Interest soared after its non-traditional rookie run, which introduced a host of morally ambiguous and versatile characters that pivoted from the protagonist to anti-hero, to antagonist and back at the drop of a hat. The show’s fanciful escapism has captivated audiences ever since. It turns out that viewers enjoy subverted expectations.

Demand for Season 4’s first three days has soared +36.6 percent compared to Season 3 in the same time frame. From July 19 to 21, 2019, La Casa del Papel Season 3 drew 23.24 times the demand of the average series globally and was the fourth most in-demand series in the world.

As we’ve seen in key regions international regions affected by COVID-19, streaming has a significant uptick in both traffic and new sign-ups. Even linear television is seeing improved ratings amid worldwide self-isolation and social distancing. That the non-English series could have such a forceful global footprint while still prioritizing cultural identity is a great sign for Netflix and a testament to the show’s execution.