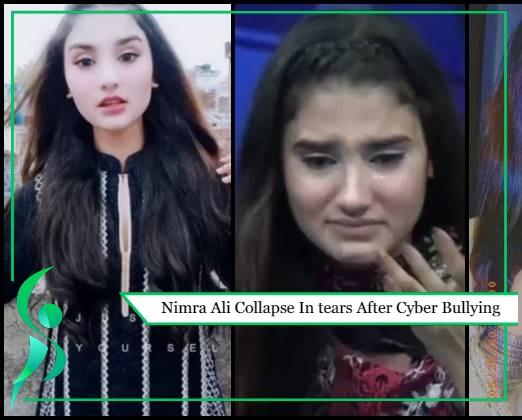 Nimra Ali, the girl who is known for her bubbly and cherishing personality and who went viral recently with a video clip and became a sensation of the internet. And also become trending all over social media platforms especially Twitter. She first gave an interview on city channel 24, and from there, her media journey begins and she was being interviewed for a couple of channels. As she early shared with the audience that she always wanted to an anchor.

Nimra Ali, who presently breakdown the internet with her sparkling nature and became a source of entertainment for thousands of people is now seen bursting in tears in an interview conducted by Suraj Tv. The reason was she was being bullied by social media and the audience. The media and social media made her burst in tears and start crying after seeing her fake youtube video and hearing all fake and hateful comments about her personality.

The internet sensation who was being famous by her joyful clip lead down by bulliers speaks off that social media is actually behind the reason of her collapsing on national television. After she went viral, there came up in numerous footage, memes, and videos criticizing and judging her character for sake of fame. After her video gets into streaming people start taking a stand for her and replying to the bulliers.

People are tweeting and sharing her views about bullying Nimra Ali on social media. People are even talking about the sick culture of our society who targets the one who becomes popular then rips them off with their harsh and mean comments. Another #NimraAli seems to trend on twitter.

People were also posting about how benevolent and jolly she is. And she is only 17 years old and making a teenage cry on TV is such a shame to people.