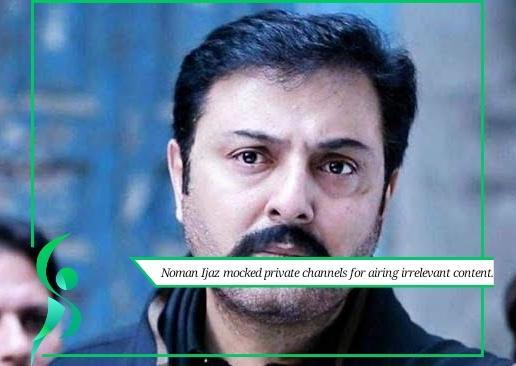 The veteran actor Noman Ijaz was recently in a conversation with ace director Rafay Rashidi, where he yelled at private TV channels for streaming irrelevant content.

The actor elaborated his point, and discuss the progress of characters and content since he started working in the entertainment industry. He said, “If you watch our dramas on YouTube or any other channel, you will see that our characters move from the lounge to the drawing-room, from there to the kitchen and from the kitchen to the bedroom.”

” They don’t want to go outside, they don’t even want to look outside the window. How many stories you can make within the four corners of the house”? He questioned.

In addition to slamming characters, he also pointed out the content which is normalizing the wrongdoings. The ten-minute long video is circulating on social media, widely appreciated by the drama-lovers.

“Almost all the issues they highlight are similar. Before these private channels came in, dramas used to come in from all four provinces. You got to know about their cultures, their customs, their folk stories, and sitting at home just watching those dramas you used to get so much knowledge.”

The actor explained how prior to foundation of private TV channels, culture and customs of all the four provinces were streamed back in the day. Besides this, he also criticized the story writers who pictured one character having an affair with another character.

“Or you end up seeing this individual taking revenge from someone else for somebody else, or a mother hating on this person’s daughter. What is happening? What are we doing?” he mocked the story writers.

“Your dramas have diminished, you need to wake up! These people are just sleeping and feeding an empty box.”

He went ahead to say that audiences are exposed to Netflix and Amazon Prime, we should stream content that could compete with them to save our industry from the drastic fall.

“These kinds of things happen on a small scale, but if you start showing such negativity on a channel watched by the masses, they will adopt it. I think our media should be hanged, they’re not educating anyone. They think their audience is not smart enough, the audience has become aware but the media is still stuck. They don’t want growth they just want volume” said Noman Ijaz.

The conversation between Noman Ijaz and Rafay Rashidi has pointed out the truth. This conversation should be a wakeup call for all the owners/producers of private TV channels. We should be fully equipped when streaming content.

From the last few years, TV channels have proved their role in creating awareness. But in recent days, every other drama has a story where two women are after one man. Such dramas aired in recent days include Pyar K Sadqay, Jalan, Mohabbat Tujhe Alvida to name a few.

It’s high time for TV channels to recognize this conversation between Noman Ijaz and Rafay Rashidi, it’s better not to normalize wrongdoings. The actor has always proved his versatility and will continue to do so in the coming days.