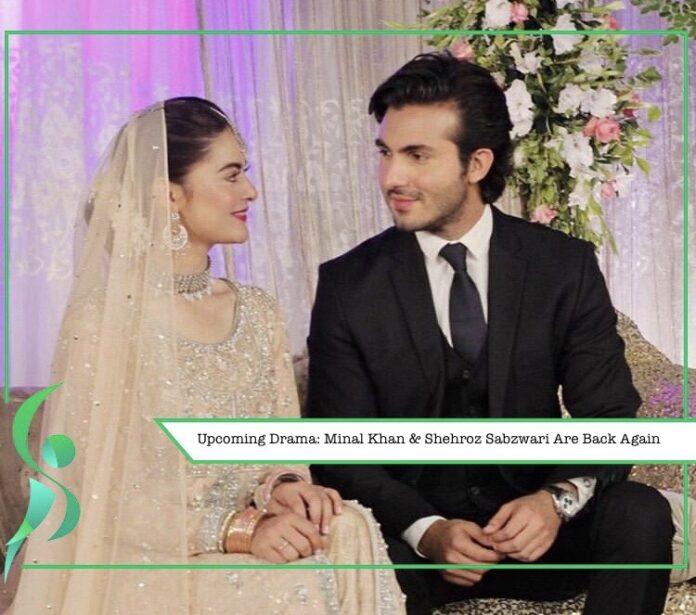 Minal Khan and Sharoz Sabzwari were lastly seen in the drama “Hasad” which was a massive hit. Now on-screen gorgeous couple is back for their upcoming drama by ARY digital. We couldn’t see much of their chemistry in their last drama as Armaan aka Shahroz Sabzwari died very early but let’s hope to see them even more in this one.

Minal Khan and Shahroz Sabzwari were loved by the fans and wanted to see them more together. And it seems like ARY digital themselves are very excited to launch them yet again and we all really excited to see more of them.

ARY digital.tv posted a picture of both the actors with the caption “We can definitely expect some amazing on-screen chemistry from Shahroz Sabzwari and Minal Khan in their upcoimg drama which will be coming soon on ARY Digital!”

Nothing has been revealed much yet apart from that both of the actors are paired for their upcoming drama and we are sure it’s gonna be a really interesting one. Meanwhile, we are seeing the actress Minal Khan in her drama called “Jalan” which is trending nowadays. Viewers are loving it and not liking it at the same time.

And the actor who has just come out of a lot of controversies is busy shooting for his comedy upcoming drama “Ghar k na ghat kay”. Where he will be seen opposite to his recent wife Sadaf Sabzwari and according to the sources it is going to be aired soon.

Are you excited to see Minal Khan and Shahroz Sabzwari again on the screens soon? Well, keep following us to get to know more abouts and ifs of our industry.