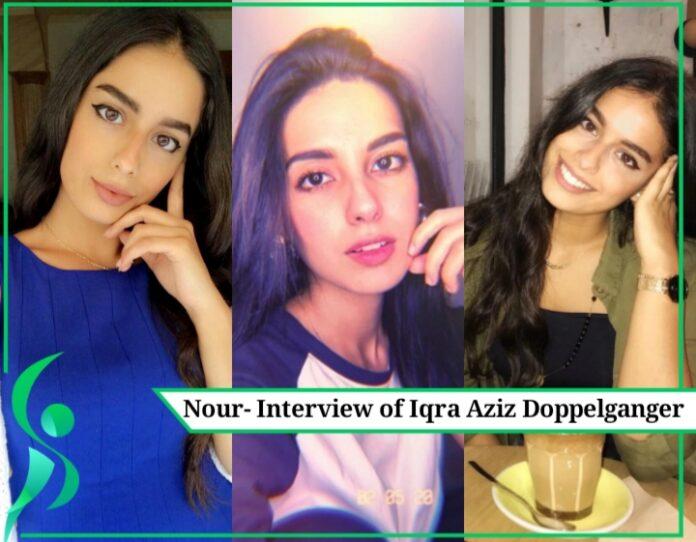 Labanese Iqra Aziz Doppelganger is all over the internet!!!!!!!

It’s normal to look like a sibling or a close relative, but it’s natural to be surprised when it comes to someone overseas.

On Twitter, there are many rumors about the well-known actress Iqra Aziz Doppelganger, who also attracted the attention of Iqra Aziz’s sister and expressed surprise at such similarities.

Iqra’s Doppelganger, Nour, is from Lebanon and is an architect.

Sidra Aziz shared Nour’s video on Twitter in which she is present with her fiance. Sidra wrote in the caption, “For a moment I thought … But no, that’s another beautiful man. “

Nour also retweeted Sedrah’s tweet, in addition to which another social media user also tagged Nour and wrote: “You look like Iqra Aziz”.

The Lebanese architect wrote in response: “I saw Iqra from Google search and she is very beautiful. Thanks for the comparison. “

In Conversation with Nour, we asked her where she lives and what does she do?

Nour: I live in Beirut, Lebanon. I’m an Architect and freelance graphic designer.

SP: How old are you?

SP: How and when do you come to know about you have resemblance with Iqra Aziz?

Nour: I posted a video on Twitter recently (as I usually do) of me and my fiance singing in the car, and it went viral. That’s when people started telling me that I resemble Iqra Aziz.

SP: How do you feel that you resembles with a talented Pakistani Actress?

Nour: I was overwhelmed and very happy that I was being compared to someone as beautiful and charming as Iqra.

SP: What do you think about Iqra Aziz?

Nour: From what I’ve seen so far, she’s definitely a talented actress and I noticed we have similar facial reactions and expressions. Also, I like her style and I feel like we have the same taste in several things.

SP: Do you want to meet Iqra Aziz?

Nour: Of course! I would love to meet her. I’ve always wanted to find my doppelgänger and the fact that it’s a sweetheart like Iqra makes me all the more excited.

Please let us know in the comments section what do you think about Nour’s resemblance with Iqra Aziz.