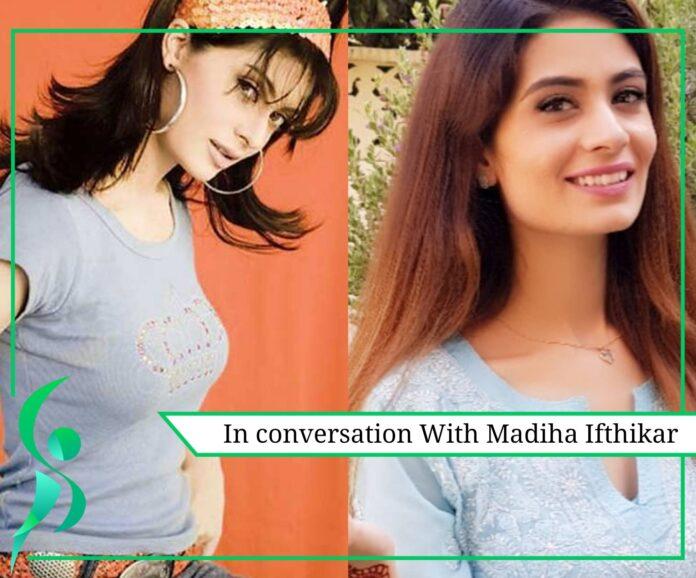 Madiha Ifthikar is a proud daughter of Iftikhar Ahmed and Rehana Iftikhar, born in Islamabad. She started her career at the age of 17, known for her breathtaking acting and lovely smile. Her eye-catching expressions made people hooked to TV screens. She has done quite a several dramas which include: Souteli, Kaise Yeh Junoon, Dil Dard Dhuan, Andata, etc.

Madiha Ifthikar has work with the renowned actors of her time but now happily married and settled in Dubai.

We recently had a conversation with her and which is as follows:

SP: How are you spending your quarantine?
Madiha. Well, we had time to spend with our family, we cook together, eat together, play together, we value the time Allah has given. He has given us the chance to connect with him. We try to do as much for the people as we could( without posting it on social media ;). So I am enjoying my quarantine.

SP: Tell us about your journey in the entertainment industry.
Madiha: It was a beautiful journey, most people know how I got into media. I was the luckiest young girl back then who has worked with almost all the senior renowned actors and learned a lot from them. I made amazing friends who are my family now. My fraternity is always there for each other.

SP: One difference you have observed in the entertainment industry after you left.
Madiha: That’s a difficult question. When I joined media our seniors use to say their time was the best time now that I am senior I’ll say our time was the best time so I think people change, thinking change, behaviors change according to the period. So I have seen a lot of difference now there’s positive and negative. The only thing I want to see is to be professional and be sincere with your work.

SP. What are your favorite new age actors?
Madiha. I am not a good person to ask this question as I don’t watch dramas a lot and have very little knowledge about new actors, but recently I like Yumna for her role in Pyar k Sadqay. She has a great margin to act and she is doing justice to it.

SP: Any actor of the current era, you want to work with.
Madiha: I want to work with all the new actors. Because every actor has it’s own style and character and you get to learn new things and methods.

SP: What is your opinion on the streaming of Turkish content?
Madiha: This is a good step, I am and was never against the content from other countries. I agree that We should promote our culture and traditions but showing other cultures and that too from the golden era which is giving you awareness about your religion about your forefathers isn’t a harm. Turkish dramas are binge-watching. We should on air such projects which are not based on extramarital affairs, sister enemies, love triangle. We need to see the bigger picture now.’

SP: Where do you see the future of the entertainment industry?
Madiha: I was expecting a change of scripts and concepts a little bit, when I came back I was surprised that the new era is also working on the same scripts which we have done many times. There is a different cast but the same story, unfortunately, we are out of stories and no one has the courage to experiment on new stories. We need to come up with different subjects which could help the young generation to be a better person. Life is not about love, revenge, betrayal there’s more to it.

SP: What is your opinion on films currently made in the country?
Madiha: I am glad that our film industry is reviving and we get to see Pakistani movies in different countries now. I feel proud at least we are taking small steps to make our film industry run in the whole world, InshAllah.

SP: Who is your inspiration in life?

Madiha: My parents are my biggest inspiration. I’ve seen my parents work selflessly for the betterment of our deaf community. They have started ‘Bolty Hath’ to make normal people communicate easily with differently Abled and they have encouraged them not to take their disability as their weakness but make it their strength. I want to be like my parents one day.

SP: One thing you love/hate about yourself.
Madiha: I love that I am very selfless I can’t see anyone in distress. I hate that I expect a lot from the people who are close to me. I should stop expecting to make my life easier.

SP: Any regret in life?
Madiha: Nt really, I did what I always wanted. I have lived my life the way I pictured when I was young, I got married to the person I love the most. I don’t have any regrets, Allahmdullilah.

SP: Three things about you the world doesn’t know.

Madiha: There’s no such thing that people doesn’t know about me. I am an open book .

SP: any message to your fans who miss seeing you on screen.
Madiha: My fans who are missing me I miss you all too.
you can follow me on Instagram:https://www.instagram.com/madihaiftikharofficial.You will not miss me anymore because I’ll be more connected to you there then dramas.

Thank you Madiha for being a great sport through out the interview. Wish you all the best for your future ahead.