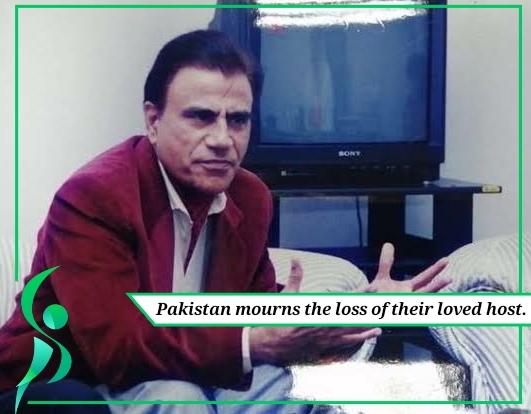 The legendary host of Neelam Ghar Tariq Aziz passed away in Lahore today at the age of 84.

Tariq Aziz was born in Jalandhar, Punjab, British India on 28 April. He was an actor, host, and politician. Tariq Aziz was famous for his show on PTV titled, Neelam Ghar which was later renamed as Tariq Aziz Show and then Bazm-e-Tariq.

Tariq Aziz was the first one to start the trend of game shows in Pakistan. It was a quiz show which was continuously streamed for 35 years. He was awarded Pride of Pakistan in the year 1992 by the President of Pakistan.

Tariq Aziz was critically ill for a few days and got admitted to a private hospital. He died on 17 June,20 marking an end of an era. As soon as the news broke out, politicians, celebrities, and his fans from all the world offer his condolences and prayed for the departed soul.

President Arif took his social media handle and prayed for the legendary host.

Shahbaz Sharif, PML-N chief also extended his support to family and loved ones. He said that Aziz was a patriotic person who proved his mettle with his talent.

Actress Mahira Khan also offered her condolences, calling him a legend, adding that his death marks an end of an era.

Singer Ali Zafar was also sad to hear about this and was thankful to the veteran host. He was also confident that his memories will never fade away.

The captain of the Pakistan Cricket team, Babar Azam termed it as a huge loss that will never be filled again.

The death of the former host is currently in the top trends of Twitter, where people from all walks of life are offering prayers for the departed soul.

Well, the death of Tariq Aziz has left a void in the industry which no one will ever fill.

From the platform of Showbiz Pakistan, we offer condolences to his family and loved ones.