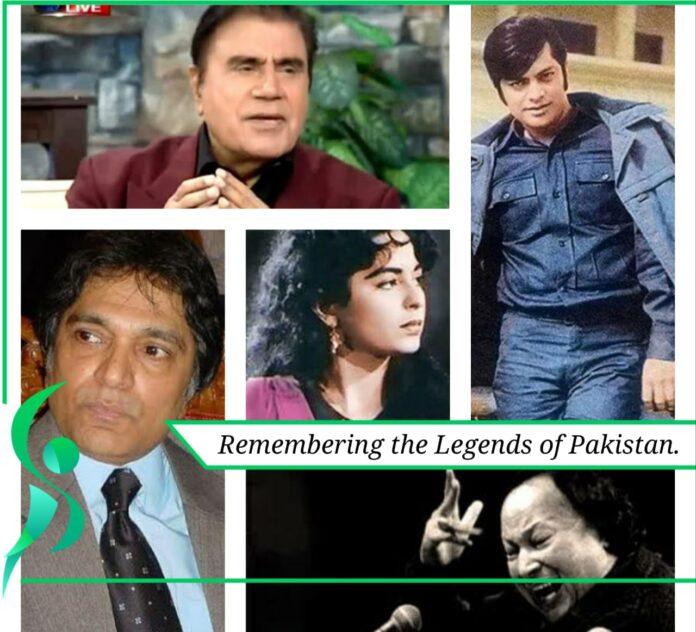 NUSRAT FATEH ALI KHAN: The King of Qawwalis or Shehnshah of Qawwali Nusrat Fateh Ali Khan needs no introduction. The vocalist, music director, and primarily singer of Qawwalis, was blessed with the greatest voices recorded in the world.

Khan is one of the legends of Pakistan who toured almost 40 countries and recorded 125 Qawwali before he died for which he holds the Guinness Book World record. He was given an honorary title of Ustaad too for his musical skills.

The music maestro possessed a great range of vocal abilities and could perform at high intensity for several hours. The King was awarded many honorable titles during his 25 years of career but his death has left a void in the music industry which no one could ever fill. His legacy is carried by his nephew Rahat Fateh Ali Khan.

Moin Akhtar was a humorist, impersonator, comedian, film and tv stage artist, host, writer who rose to fame after working with Radio Pakistan. His on-screen portrayal of character Rosy is one of the iconic and important figures in the history of the sub-continent.

Moin was bestowed with Pride of Performance and Sitara e Imtiaz for his contribution in art and cinema. The versatile legend shared stage with acclaimed Indian Legends Dilip Kumar, Lata Mangeshkar and Madhuri Dixit.

His co-star Anwar Maqsood and Bushra Ansari still remember their legendary friend. The Madam Tussauds in London has expressed wish to include his wax statue. If the statue is formed it will be the first of its kind for any legend of Pakistan.

Tariq Aziz is known to be the first television to gain commercial success for hus quiz show Neelam Ghar, later renamed as Tariq Aziz Show and then Bazm e Tariq.

One of the legends of Pakistan whose opening lines still echoes in our ears,” Dekhti Aankhon aur Sunty Kanoon ko Tariq Aziz ka Salam”. The pioneer of Pakistani game shows bar was raised high by Tariq Aziz which was continuously streamed for 35 years.

Tariq Aziz served the nation as a politician too. He is also a recipient of Pride of Pakistan.

The Chocolate hero of the entertainment industry Waheed Murad, debuted alongside Zeba in film Aulaad. But he is popularly known in the sub-continent for his films titled Armaan and Heer aur Pathar.

He ranks in one of the legends of Pakistan who acted in 115 Urdu films,8 Punjabi, and 1 Pashto films. He is bestowed with 32 awards. He was awarded Pride of Pakistan after 27 years of his death.

The first Superstar of the entertainment industry Sabiha Khanum ruled the film industry in 1950-1960 but continued to win awards till 1990. One of the legends of Pakistan was awarded Pride of Performance and 6 Nigaar awards.

The actor shared the best on-screen chemistry with her husband Santosh Kumar and gained a substantial fan following in the year 1950-1960.