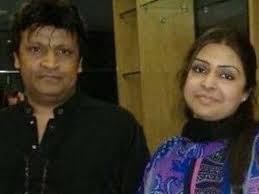 Tragic news for the legendary actor and comedian Umar Sharif and his family was here when they lost their daughter, Hina Sharif today. she was suffering from a chronic kidney infection and was admitted to a private hospital of Lahore when she lost her battle of life against her disease.

Umar Sharif was present in the United States for some personal works at the time of this incident. His family was accompanying her daughter in the hospital.

Umar Sharif canceled his show in Houston, USA, as soon as he got to know this tragic news and returned to Pakistan for the funeral of his daughter.

The deceased’s family members on Tuesday alleged that a botched operation conducted by a doctor resulted in her death.

Hira’s brother has already filed a complaint with the Punjab Human Organs Transplantation Authority (PHOTA) against the clinic in Pakistan Administered Kashmir, alleging that a doctor and his medical staff conducted illegal transplantation of Hira’s kidney, Reported Geo TV.

Adnan Ahmad, PHOTA Deputy Director, said a team had been constituted to take action against doctors involved in conducting the medical process illegally.