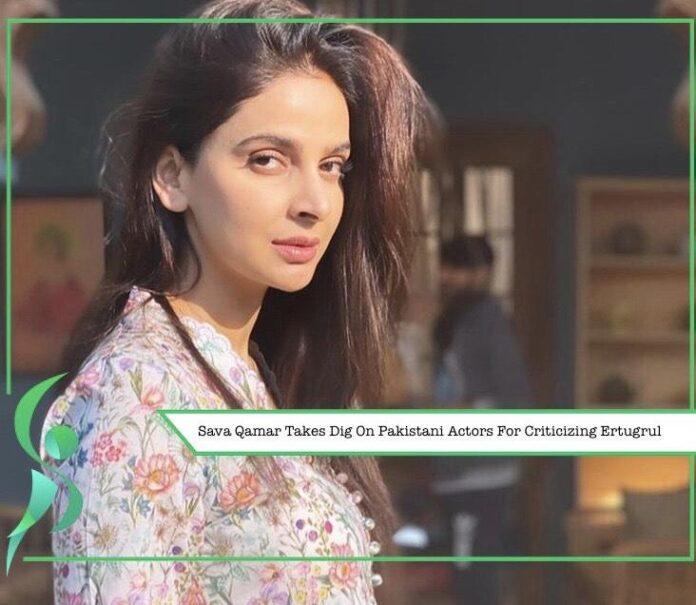 Saba Qamar is well known for her tremendous acting skills. If someone in our Pakistani actresses know how to accept the challenging roles in the best way then that is for sure Saba Qamar. Her last drama serials was a blockbuster and they deserves to be. Her acting in “Cheekh” aired on ARY digital, “Baaghi” which was a biopic on Qandeel Baloch and her Bollywood debut movie “Hindi Medium” was immensely loved by everyone.

Not just Saba Qamar is known for her ah-mazing acting skills but also her rebellious outspoken personality. She never steps back to keep herself from commenting on any controversial topic no matter how opposite or different her opinion is.

Just like that, in her recent live interview when the actress was aked to comment on the criticism PTV is receiving for airing foreign series “Ertugrul Ghazi” to which she replied in the best way possible. She said: “When PTV the national channel of Pakistan was going on a downfall none of the actor took a stand for it or did any show with them to bring their rating up. But now if some other series are investing on them and giving a chance to grow then all the actors are criticizing it.”

She also added further complaining about how no one in this industry appreciates other, she added: “In our industry none of the actors or actresses every appreciate others for their good they never call each other but on the other hand they will always be there to criticize one minor mistake. They pinpoint the bad sides rather than of the good one.”

We think that Saba Qamar has spoken utter truth and we really do love her way of expressing. Recently, the actress has just launched her YouTube channel with the name “Saba Qamar Official” where she’s seen mostly talking about the recent ongoings in the world.