Home Latest No more ban on PUBG, YouTube and TikTok 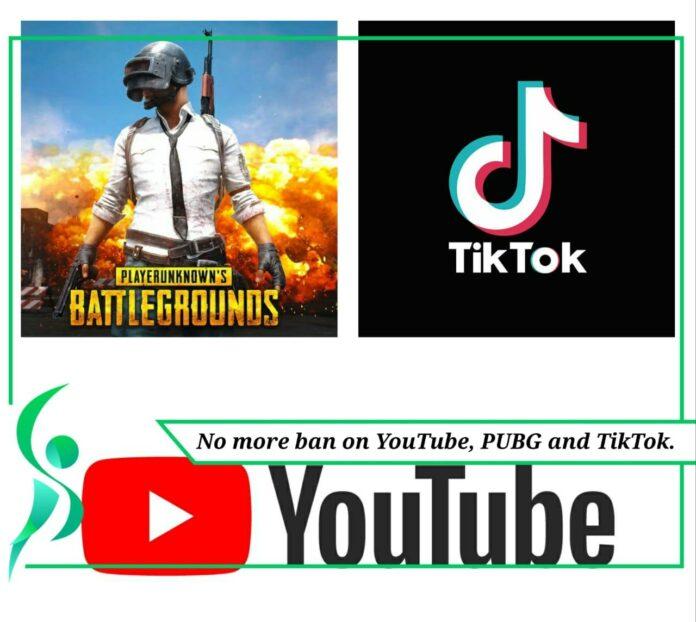 Over the past few days, Pakistanis have been struggling with the imposition of ban on few entertainment websites including PUBG, YouTube, and TikTok. But, now there has been a sigh of relief as people are provided assurance over the issue.

The honorable court of Pakistan issued a statement, suggesting a ban on YouTube and TikTok for uploading irrelevant content. Later, people went furious and demanded to cease the ban culture.

The science and technology minister also expressed his disappointment over the matter and suggested the court not to come with any hindrance in the development of technology.

Over the matter, the government of Pakistan took notice and guaranteed people, that it will not happen. A wave of comfort was seen among Pakistani, who took twitter to express their sentiments.

While there is some conflict over the ban on TikTok, a lot of people also think it is a platform that enables awareness.

People were ecstatic over the news, because YouTube serves as source of education too.

The ban on YouTube, PUBG, and TikTok is not a solution, it takes back the dream of establishing a digital industry. In the present world, Pakistan is already way back from the world.

The digital industry has started to flourish now, creating employment opportunities for many people. Imposing a ban on sites is never a solution, ensuring better curation through dialogue and policy should be the focus.

A lot has been done in the past years, and Pakistan was left behind. Its high time to promote digital technology and put a stop on this culture.