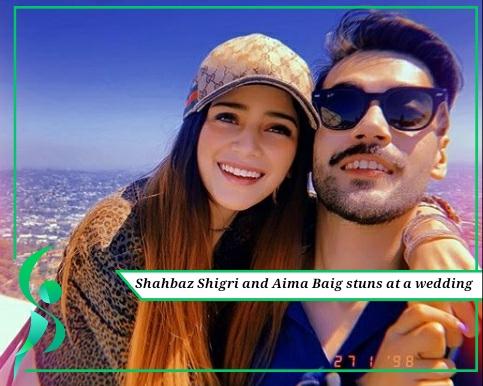 The much-loved star singing sensation of the country, Aima Baig is recently enjoying the festive of her sister’s wedding ceremony. The Nikah ceremony happened today, and the event marked attendance from her beau Shahbaz Shigri.

As soon as the pictures were revealed of the duo, it broke the internet. Fans can’t stop gushing over the two, and we are also head over heels on these pictures. Additionally, while Shahbaz looked like a dashing in a cream-colored suit, Aima also looked like a dream in red velvet saree.

The event was graced by singer Momina Mustehsan , and other people from the industry.

Shahbaz Shigri and Aima Baig were often spotted together, and after a while, the speculations were confirmed by Aima in an interview. She said, “The rumors that have been abuzz, I can only say that they are true. We-vibe really well.”

The two can’t stop posting pictures, and look much in love. However, the wedding isn’t happening anytime soon, as confirmed by the singer.

Well, we wish Shahbaz Shigri and Aima Baig a lifetime of happiness, and wish too see more of these adorable pictures. What do you think about the duo? Let us know in the comments below.