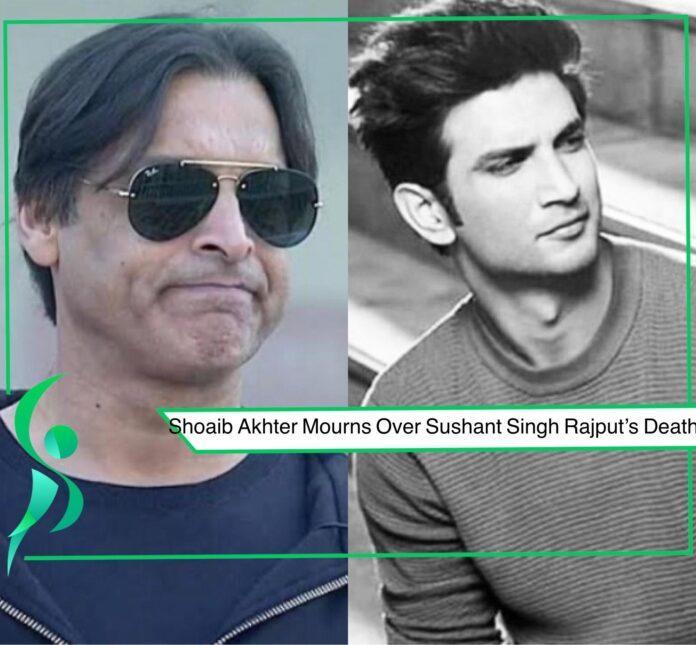 Not just Indians or bollywood is mourning over Sushant Singh Rajput death but our Pakistani celebrities were as well really shocked to hear this heart breaking news.

And so did our former cricketer Shoaib Akhtar also posted a video on his YouTube channel where he expressed that “he regret not talking to Sushant Singh Rajput.”

The cricketer made a video of 11 mins and 42 sec on late actor Sushant Singh Rajput where he discussed the first time he saw him (Sushant Singh Rajput) and his first impression on him. He further said: “It left me very disturbed. I felt very sad about the incident. One thing about it is bothering me. I met him (Sushant) in Olive in Mumbai when I was about to leave India in 2016. A boy was approaching with long hair and his hat askew.

He also expressed how he was not certain about him doing the biopic of Dhoni and how Sushant Singh Rajput left him speechless: “I did not feel a lot of confidence when somebody told me he would be portraying the role of MS Dhoni in a biopic. I thought I will have to watch his acting now. He has come from a humble background, and he is making a good film. The film did turn out to be successful. But one thing that bothered me was that I should have accosted him and shared my life experiences with him. This may have given him a broader spectrum in life. I regret not talking to him”

Shoaib Akhtar also talked about how we should deal with our problems and should never consider the option of committing suicide as our only escape and also used the example of famous actress Deepika Padukone. He added: “It is not good to opt for the easiest escape — to kill oneself. Setbacks are a part of life. When you are aware of your life’s problems, please share and discuss them with those close to you.  She had a problem, and she openly said that I have anxiety issues and I need help. Sushant also needed such help, and probably he was taking it also. But he should have shared his problems with his strong-minded friends,” he added.