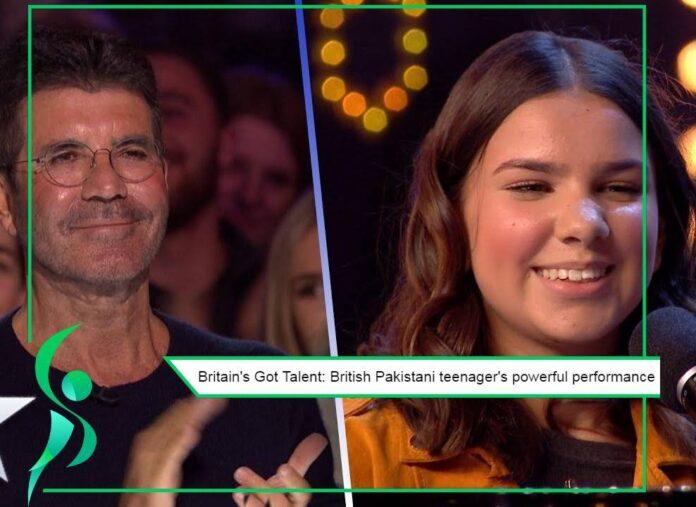 Sirine Jahangir’s rendition of Gabrielle Aplin’s My Salvation not only received a standing ovation from the audience but also a yes from all four judges, taking her to the next round.

At the start of the performance, a visibly nervous Sirine Jahangir told the judges that she was visually impaired. “So it’s pretty obvious that I can’t see. There was a time when I could and now I can’t […] but I guess music is my vision and that’s what I live by. It’s like it’s my thing.”

During the performance, Sirine Jahangir’s younger brother and mother were visibly emotional as she played the piano and sang her heart out.

When it came time for the judges’ comments, David Williams said: “Well done Sirine Jahangir. What you couldn’t see was the whole of the Palladium on their feet applauding you because they loved that.”

British singer Alesha Dixon congratulated the young singer on her performance. “What a sweet, sweet girl you are, my heart is just melting. You are so nervous but it’s completely understandable because it’s such a massive deal and you sang beautifully.”

The heartbreaking moment Sirine and her parents realized she had a serious eyesight problem was when she dressed up as a pirate aged five.

As soon as a patch covered her right eye she couldn’t see anything, as all vision had already gone from her left.

Simon Cowell started his feedback by asking the teenager the reason behind her nerves.

“I only do school performances so this is something completely new and being able to sing right now is such a big opportunity and I don’t want to waste it.”

“Good for you,” Cowell said before adding: “I think I should be the first person to say yes.”

According to The Mirror, Jahangir lost her eyesight at age nine.

Her parents realised their daughter might have a serious eyesight problem was when she was five. Four years later, despite agonising medical procedures, Jahangir also lost all vision in her right eye, the publication said.

“When I lost my sight, I like to think I got new gifts. I used to like dancing, but when I became blind I spent more time singing and playing piano,” the publication quoted her as saying.

The live shows have been postponed amid the ongoing coronavirus pandemic, this evening’s show was filmed earlier this year before the lockdown.

Simon Cowell, David Walliams, Amanda Holden, and Alesha Dixon are back for another round at the judges’ table this year.