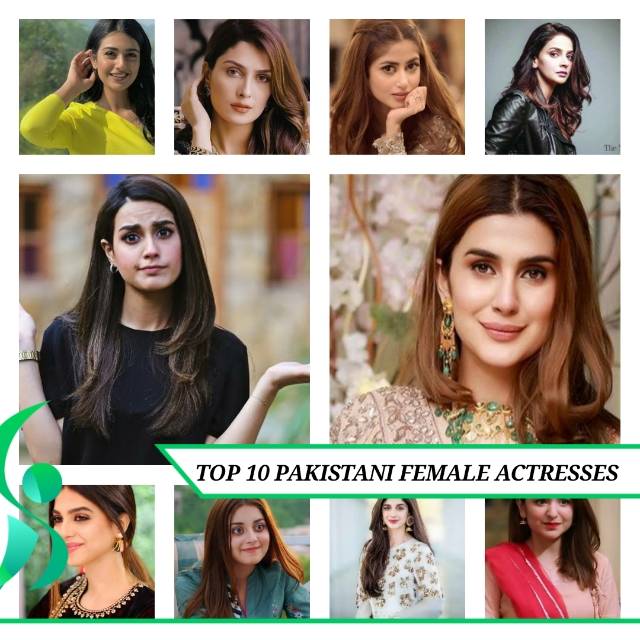 Here is our list of top 10 Pakistani female actresses who are ruling hearts of audiences these days:

1. Sajal Aly:
Sajal Aly now known as Sajal Ahad Mir made her debut in the entertainment industry in the year 2008 on Geo TVs’ well-known program Nadaniyaan. Her appearance was first recognized in hit soap Mehmoodabad k Malkain and then there was no looking back. With smashing hit acts one after another, 2019 was her year in the industry. She yet again proved her diversity in rib-tickling yet shady character in Aagan and then her performance in Alif which kept her fans captivated. Her on-going drama is Yeh Dil Mera in which she depicts the role of a girl with mental illness, looking for security from men in her life.
With time and again, Sajal has always delivered powerful performances in her dramas which led her to work with an Indian Legend Sridevi, in the picture “Mom”.

2. Ayeza Khan:
Kinza Khan, well known by Ayeza Khan is a 29-year Pakistani actress who is valued nationwide for her fine-looking and humble nature. Ayeza played leading roles in several television serials such as Tum Kon Piya, Mere Mehrbaan, Koi Chand Rakh, Pyaray Afzal, etc but was critically applauded in 2019 famous serial Mere Pass Tum Ho alongside Humayun Saeed. The serial smashed all the TRPS and the final was shown in cinemas countrywide. Her journey from naïve women to a homewrecker to looking for reacceptance showed variation like no another.

3. Yumna Zaidi:
Born and raised in Lahore, Yumna Zaidi made her first appearance in 2012 hit drama Thakan beside Saba Qamar. To date one, the most resilient and ethically valued characters have been done by Yumna Zaidi. Her accomplishment in Dar Si Jati Hai Sila was one of the finest in recent times. With heart-wrenching stories like Inkaar, Dil Kya Kary, and Ishq Zahenaseeb, 2019 was a memorable year for her.


4. Iqra Aziz:
If any actress has hit the roof to recognition in 2019 it has to be none other than Iqra Aziz, with her gut-wrenching performance in Ranjha Ranjha Kardi and then playing a comic role in Suno Chanda. Currently, she is proving her versatility again while portraying a villain role in Jhooti along with her significant other, Yasir Hussain.

5. Kubra Khan:
The Pakistani British actress Rabia Khan, recognized by Kubra Khan put her step in the industry in Na-Maloom Afrad but was first acknowledged in the drama Sang e Mar Mar and then there was no looking back. Through her minor commercial appearances, she has always spellbound her audience. The character of Husn-e-Jahan, the beautiful dancer who searches God leaving behind all the worldly things, was acted by Khan, for which she was immensely praised.

6. Saba Qamar:
The courageous and gorgeous Saba Qamar is ruling the hearts of people for the past decade. She has done a phenomenal job in the Pakistani entertainment industry which leads her in the direction of a Bollywood movie Hindi Medium. The actress holds several compliments which consist of four Lux Style Awards, Hum Award, and Filmfare Award Nomination. There is a list of hit serials under her tag. She is cherished for her unapologetic behavior all over the nation.

8. Sonya Hussyn:
Sonya Hussyn made her acting debut in the year 2011, with a supporting role but was nation-wide recognized in the drama Aisi Hai Tanhai besides Sami Khan. Moreover, she is also known for a primary character in Ishq Zahe Naseeb. She will make her silver screen appearance in the film Tich Button under the production of Urwa Hussain.

9. Sarah Khan:
Sarah Khan made her first appearance in “Badi Appa” alongside veteran actors which include Sawera Nadeem, Noman Ejaz, and Ayesha Khan. She has done a list of supporting roles and is adored for her appealing and humble appearance. Presently she is providing viewers a range, appearing in a negative role in Hum TV serial Saabat.

10. Alizay Shah:
Alizay Shah made a significant debut in Mahira Khans starrer film Superstar but accredited for her stellar performance in Ishq Tamasha and then ISPRS presentation Ehd e Wafa. There is no greater testament in her success, in captivating her fans than being in most top ten Googled in Pakistan. There is no doubt that she is the present-day sensation of the Pakistani entertainment industry.

What do you think about these actresses? Tell us in the comments below.