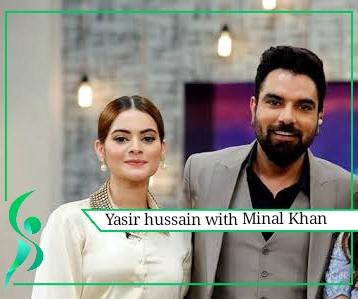 Surprisingly, Yasir Hussain and Minal Khan are going to work together. The actors are never seen sharing the screen before, but this time something out of the box is coming for the fans of talented Minal Khan and Controversial Yasir Hussain. The interest of audiences is evident from their reactions on social media, and they are waiting to see what they are going to bring.

You know Showbizpakistan.pk keeps an eye on your favorite celebrities, this time Yasir Hussain took to his Instagram handle to pay thanks to Minal Khan and the co-stars for working together on a project of the telefilm. Well, we don’t know much about it, but we will find out.

According to him, it’s something very different that he hasn’t done before. It is quite a surprise for his fans, whereas if we look at the cast and the duo, we assume something blockbuster is coming up!

The cast includes Madiha Rizvi, Tipu, while the duo of Yasir Hussain and Minal Khan are in the lead. That’s an excellent match for something great. So, stay in touch with us to get more updates about the upcoming telefilm project.