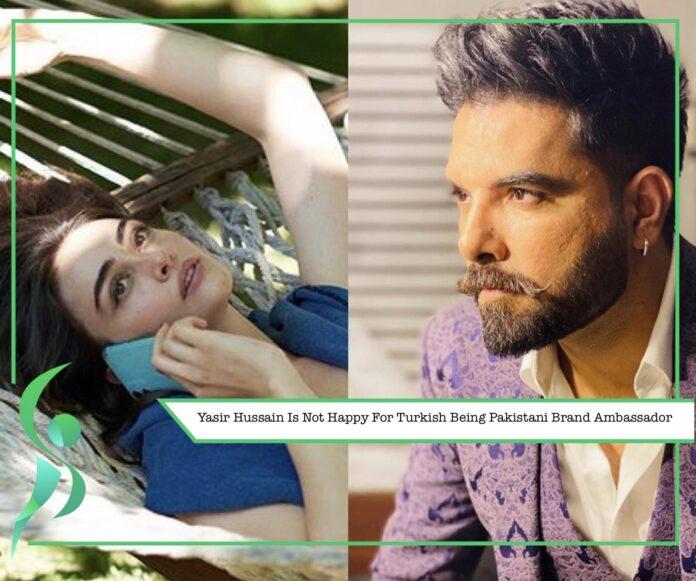 Yasir Hussain is the actor who always speaks his heart out in the most random and desi way possible. He never keeps his opinions or point of views to himself. His Instagram handle is the only account of actors we guess where followers no offense haters or admirers get to interact with the actor so nicely. Either hate or love Yasir Hussain never steps back to reply to the love with positivity or to hate at the same level.

Recently, Q-mobile just announced Isra Balgic aka Halima from the very trending in Pakistan “Ertugrul Ghazi” as their brand ambassador. Q-mobile first chose Kareena Kapoor to be the brand ambassador of their product and now they choose Turkish actress “Esra Bilgic.”

Most of Halima Sultan’s fan must be happy to hear this news but there’s always two sides of the story. And Yasir Hussain is om the opposite side. He posted an Instagram story reacting to how we have so many Pakistani Actresses are there to be a brand ambassador of Pakistan rather than choosing any Turkish Actress. He also significantly named those actresses:

He did not mention Iqra Aziz, his wife’s, name as she is already a brand Ambassador of mobile. Before this Yasir Hussain also raised a point against airing of “Erutugrul Ghazi” on PTV which is Pakistan’s national channel. He was more in favor of promoting our local talent on our national television. While most of the other actors were in favor of him but some of them were against him as they have no problem with it.

Pakistan industry’s famous twins Aiman Khan and Minal Khan who have huge fan following also respond to Yasir Hussain being against Turkish actress being the brand ambassador of Pakistan.

Aiman Khan re-posted the story of Yasir Hussain as an act of supporting him.

While, Minal Khan who is newbie as well as being acting on Twitter tweeted how Yasir Hussain is perfectly right and now his haters will try their level best to proof him wrong. Also, she re-posted Yasir Hussain’s story on her Instagram handle having huge following:

What are your opinions on this do let us know!